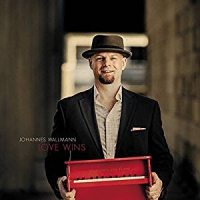 The depths to which some factions of "civil" society will sink in order to deny others their equal rights, respect, and acknowledgement is downright depressing. But the height to which love can rise and overcome is heartening, to say the least.

Pianist Johannes Wallmann is better acquainted with both of those aforementioned truths than your average citizen. When he moved to Wisconsin in 2012, he had been in a legally-recognized same-sex marriage for five years. Neither Canada nor California sought to argue or deny the truths of that love while Wallman and his husband called each their home. Wisconsin, however, was another story. As Wallmann notes, the Badger State essentially viewed him and his husband as "legal strangers." But rather than simply accept the situation, he took action. Wallman challenged the legality of Wisconsin's laws relating to the subject, signing on with his husband as one of eight plaintiff couples in the landmark Wolf v. Walker case that ultimately bore out the fact that love wins.

This aptly-titled album takes inspiration and directional cues from that experience. Wallmann, teaming up with spoken word artist Rob Dz, traces and celebrates this struggle and triumph. Adopting a broader stance not limited to marriage equality, he addresses history, civil liberties on the whole, and societal issues stretching across a large canvas. In the strutting, NOLA-inflected "Equality!" opener, for example, Dz cites or references both the Stonewall Inn and Rosa Parks' seated stand before launching into an exploration of equality's meaning. Then, after instrumental rubato ruminations on "Preamble," Dz homes in on the topic at hand during the oft-vamping, comfortably-paced title track.

The voices of various soloists—Wallmann, trumpeter Russ Johnson, guitarist Kenny Reichert, and tenor saxophonist Dennis Mitcheltree, to mention a few—are artfully worked into the numbers on this album, serving the story itself and the art in the storytelling. Nobody grandstands; everybody understands the purpose of this music.

As the album moves forward, so too does love itself. "We (Reach For) Love" carries a sense of determination within its resolute feel; "The Seventh Circuit," lacing a foreboding rock atmosphere with audio clips from Wisconsin's failed last-ditch appeal to the titular court, paints part of the struggle in its journey; "Can I Know (More Love)" is a calm call and plea, gently expressing a strong desire to see things righted; and "We (Will) Love" carries hope in its heart.

Love's quest and Wallman's win are inextricably linked in this music, but there's a universality to be found in this most personal of projects. The battle for truth, justice, and fairness, touching nearly everybody in some way, is never over, and Wallmann reminds us that we shall overcome.

Equality!; Preamble; Love Wins; We (Reach For) Love; The Seventh Circuit; Can I Know (More Love); Stonewall Was A Riot; Go On; We (Will) Love; Coda.