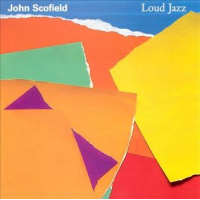 If I ever needed a title to categorize John Scofield releases from his Grammavision days, I couldn't find one more apt than Loud Jazz (Grammavision, 1988) This was the last of Sco's hot, electric funk fusion releases. He's still groovin' and in the pocket today, but not the electric, loud, in-your-face stuff evident on this album. Although I'm a fan of all of these early releases, and even some from the mid 70's, this is probably my favorite Scofield release. The reason is simple. All of the standard "Sco" stuff is there, but these tracks are more lyrical. The melodies and rhythms are less pushed. The album, overall, feels relaxed and hip.

And the classic gang is all there too. Gary Grainger is spry and funky on bass with Dennis Chambers doing what he does best with a powerful and punchy kick drum. They're joined by keyboardist Robert Aries and Don Alias on percussion, with George Duke taking the keyboard solos.

I can't think of a bad track on this album. Not even one that I get bored with. This is quintessential Sco-funk from the opener "Tell You What" to the title track. Like most Scofield albums, I find myself thinking "these guys had a lot of fun playing these tunes." There's energy, wit, humor-all the elements. I especially found the change of pace, almost melancholy ballad, "True Love" endearing. Even though there's room to take this and rip it like the other tracks despite the depressed tempo, Sco maintains the vibe, keeps it pretty, and does a wonderful job.