By RICO CLEFFI
February 11, 2005
Sign in to view read count
LG: I'll be touring Europe with the NuBand, which is Roy Campell (trumpet), Mark Whitecage (reeds), Joe Fonda (bass) and myself. That's a cooperative band, there's no leader. That's been together for about three to four years. We have 16 concerts in 17 days in five countries - France, Netherlands, Switzerland, Germany and Austria, and we'll be hot by the time we get back (laughs)!

AAJ: Whose compositions is that band playing?

LG: Everybody's — we've all contributed stuff, and it's also a band with compositions and open improvisation. That band has a bit of a political side to it. There are some pieces that are anti-war. Roy's written some poetry, and Mark has some things that he reads. On the US tour in Spring 2003...Joe Fonda spoke first about Bush...and we hit "free jazz" hard. This band has had a political side to it from the beginning.

AAJ: Are you finding big differences still exist between European and American audiences? 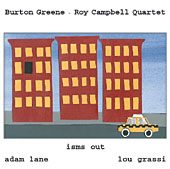 LG: We'll they're always more enthusiastic over there, really. I guess for a number of reasons. One is that they have a history of culture, and they tend to be more open minded; their tastes aren't as controlled by the media. Over here the media gets your mind at about the age of eleven, and tells you what you're supposed to like. Unfortunately, it's changing, now. American pop music has its claws everywhere. My wife and I just came back from a vacation in Italy, and the restaurants we ate in, we never heard Italian music, we only heard the worst of American pop music in the background all the time. It's a financial thing. In Europe the government felt the arts were something they had to support...and they really can't do that anymore...there's a worldwide recession...they're all looking for corporate sponsorship for their festivals, car companies, it's just like here. Once you're beholden to those powers, you have to become more commercial.

I've sometimes played in Germany, in situations where sometimes there were only 12 people, and we got paid well, and there was no static, nobody minded. And they said "Oh, we're sorry we didn't get you a better audience". They believe that art should exist. It has value for the culture; it's not expected to be profitable."

AAJ: When you're leading your own band, how are things different?

LG: I'm a kind of a low-impact leader. Some leaders really try to control everything. I trust the people that I have to do what's needed, and to undoubtedly show me some possibilities of what could happen that I would have never considered....I'm not such a great composer that my music is sacrosanct, or something. I want to see what they can make of it — in fact, I count on them to make it something (laughs)! If they're creative people you don't have to give them a lot to work with, you give them a seed, and they create a flower and tree from that.

AAJ: You transition from straight-type bop to music that's totally free. Do you see the two as being different worlds?

LG: Right, I do both, and a lot of people do. I had a conversation with somebody about this just last night. I did several gigs recently with Charles Gayle (saxophonist and pianist). He's playing alto now and using a different approach. We were using standard tunes to launch us, and really working with the material of the tunes, even if we don't keep the form and structure (sometimes we do). And somebody was surprised that he could do that. I said, well think about it, he's in his mid-60s. When he started playing...there wasn't free jazz. He grew up learning to play jazz. And a lot of the people who you think of as total free players, especially if they're a certain age, they can play "jazz". And I'm not saying they need to; there's a lot of great music in the world that has nothing to do with ii-V-I's — it's another level of substance, another source to draw on. Anybody who's of a certain age has that because free jazz didn't really start until the late '50s. In order to sell something, you have to label it and categorize it. It all comes down to how you play.

AAJ: Here's the obligatory New Year's question: where do you see yourself in another year?

LG: Hopefully right here (laughs)...just to continue doing the things I do, and be with people I love.

AAJ: Anything in closing?

LG: One thing that deserves mention...is the presenters, the people that are presenting this music. We've talked about the fact that it's now possible to put together tours in the States and connect the dots, city-to-city, and drive gig-to-gig and put together a ten day or two week tour. The people that are presenting this music almost entirely are getting nothing except the music for it. None of them are making any money at it. Most of them I think are putting some of their own money into it to make it happen. And they're as dedicated to the music as any musician. And without them it wouldn't happen, and they deserve a lot of credit.

Visit Lou Grassi on the web.