Ken Edwards: Lost in This Place 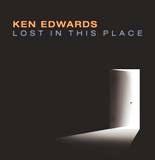 Ken Edwards is the latest in an apparently endless line of well-schooled trumpeters who have emerged from the storied University of North Texas (UNT) Jazz Studies program and set their sights on making a splash in the larger jazz community. With that in mind, Edwards has released his first CD, Lost in This Place, a (mostly) quartet date that comprises half a dozen of his original compositions (he also co-wrote "Odd Ball" with drummer Stockton Helbing) and two others ("Discipline," "Ohm's Law") by bassist Brian Mulholland.

The good news is that almost everything on the album is good. Edwards and his supporting cast are good, the songs are good, the charts are good, and the group interaction is good. On the other hand, almost nothing on the album is much better—or worse—than good. It's simply a good session, balanced on an even keel and earnestly performed by good musicians, but without any special traits that would set it apart from many others of a similar makeup. Perhaps a few standards would have helped.

Lest one thinks this is a put-down, it's not. As noted, Edwards is a fine trumpeter with splendid command of his horn, and the tunes on Place are well-drawn if not memorable. Edwards produces admirable solos throughout, and is especially engaging on "Discipline," "Requiescence" and "Detection." Nor can one reprove any of his teammates. Helbing and Mulholland are consistently supportive, while guitarist Noel Johnston sketches a pleasingly mellow backdrop and adds some placid solos of his own. Tenor saxophonist Tom Leuer and keyboardist Matt Lawless make it a sextet on "Interesting Theory" and "Found." Leuer is also heard on "Detection," Lawless on "Bus Rider."

However one measures his debut album, it's a sure bet we'll be hearing more from Edwards, as his talent can't be denied. He also has a lot to live up to, shadowing as he is the footsteps of UNT stars from Marvin Stamm, Scott Englebright and Dean Pratt to Bob Lark, Barry Ries, Clay Jenkins and so many others. He's not there yet, but given enough time Edwards may inscribe his name alongside theirs on the honor roll of celebrated UNT alumni.