The October Trio: Looks Like It's Going To Snow

BY MATT MARSHALL
February 3, 2009
Sign in to view read count 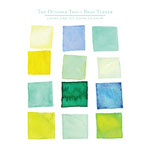 Josh Cole, the bassist and primary composer for The October Trio, cites Wayne Shorter as one of his major inspirations and that influence is apparent throughout the Canadian trio's Looks Like It's Going To Snow, with guest trumpeter Brad Turner. There are strong references to Miles Davis' Shorter-heavy Miles Smiles (Columbia, 1966) and the saxophone legend's own Speak No Evil (Blue Note, 1964).

But the group's modernist sound doesn't altogether get stuck in the grip of mid-'60s post-bop—though, to be sure, there are worse places for a band to get stuck. The repetitious bass thumps and matching, minimalist drums that drive "Found" and "Springs" are drawn from the rock and hip-hop wells, giving these numbers a sound befitting the work of another odometer-friendly trumpeter, Ron Miles and his My Cruel Heart (Gramavision, 1996). Snow's sound is further varied by the flash-free jazz of the 49-second "Flip" and the more highly orchestrated 16-plus minutes of "The Progress Suite." Turner and saxophonist Evan Arntzen weave plaintive cries on the gripping humanist lament "Give (Sydney Carton)," but turn in a looser, less-compelling mesh on the title track. But then "Bird Colony" regathers the loose twining and stitches it into an appropriate cacophony of avian screeches.

All of which is to demonstrate that this album doesn't lack for attempts at diversifying and spreading its wings. But it never really takes off. Somber bass lines regularly lift horns only into fledgling flight. But, undeniably, there is talent here in this young trio that's hungry to soar. The key may lie in the record's final statement: "Wait."