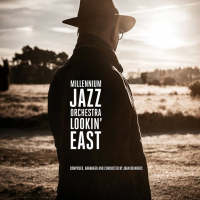 The Netherlands, with a population less than that of New York State, is home to no less than four of the world's most accomplished jazz ensembles—the Metropole Orchestra, the Jazz Orchestra of the Concertgebouw, the Ebony Big Band and the Millennium Jazz Orchestra whose latest album, Lookin' East, does nothing to subvert its status as a member of the Big Four. Indeed, there is ample cause to argue that the MJO belongs at the very top of that plateau, steep as it may be.

High on the list of reasons for the orchestra's stature is the steady leadership of Joan Reinders whose burnished compositions and arrangements not only lend the ensemble its singular personality but enable it to affirm time and again its world-class credentials. Reinders arranged everything on Lookin' East and wrote all but one of its eight handsome melodies (the lone exception is Dirk Wittej's "Mensch, Durf te Leven," whose English equivalent must be left to those more fluent in European dialects).

While Reinders' muse is more Ellington / Kenton than Basie / Herman, the MJO is more disciplined than the Duke's orchestras ever were, and as ardent and brassy when needed as Kenton's well-known archetypes. On Lookin' East he opens with a frisky samba ("Reunification"), then slows the pace on "Mensch" before opening the throttle full bore on the aptly named "Scurry." Tenor Volker Winck is showcased on the even-tempered title song, which precedes the graceful waltz "Nocturne in ¾." Reinders crowns the session with "Duets," the first of whose three disparate themes ("Efcharisto") features trumpeters Suzan Veneman and Jan-Willem te Kiefte. Trombonist Jilt Jansma and baritone Rob Helmers are playmates on "Sorrowful Song," sopranos Winck and Gerlo Hesselink on "Zugzwang."

As it nears the end of its second decade, the MJO affirms that experience, if not the best teacher, will do quite nicely until something more plausible comes along. The section work (including rhythm) on Lookin' East is unerring, the solos consistently bright and engaging. At the heart of it is Reinders, a virtuosic composer / arranger whose remarkable perception charts a steady course for the orchestra and keeps it hastening ceaselessly onward and upward.