BY DAN BILAWSKY
January 1, 2017
Sign in to view read count 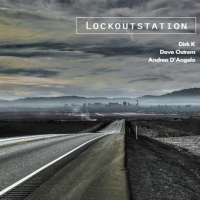 Interlaced interplay, clarity of instrumental voices and expressions, liquid lyricism, and rhythmic precision are the hallmarks of Lockout Station's work. This articulate and adventurous Las Vegas-born trio turns the highway on the cover of its eponymous debut into a road to anywhere and everywhere, navigating and accentuating the bends and turns while annexing various cultures and accents encountered during the journey.

While guitarist Dirk K penned all eleven tracks that appear on the playlist, there's a communal vibe associated with the execution of these compositions. Individual voices remain aurally lucid as three become one, making and morphing grooves, mutating different strains of stylistic DNA, and threading together intriguing forms of latticework. As K, bassist David Ostrem, and drummer Andrea D'Angelo dig in, it becomes all too clear that infinite possibilities can and will exist within and between the notes.

The Vegas odds of accurately predicting where this trio is headed at any moment has to be about a million to one. The band certainly isn't above or beyond the idea of building ideas around an ostinato or a melodic motif—it happens quite often, actually—but you can't bank on the fact that these things will remain stable. The music is never too busy, but there is an aspect of perpetual motion and evolution in these songs that keeps everybody guessing.

Lockout Station cites jazz-fusion, flamenco music, and avant-garde thoughts as influences, and all are audibly present within these tracks. But it would be selling this band short to limit it to those three admittedly large zones. Soundscapes give way to sway and search in a southern state ("New Mexico"); trippy ideals firm up and open up on individual expressions ("7 C's"); intoxicating groove allure presents as an animal's primary color, spotted with other rhythmic and melodic hues ("Calico Cat"); a NOLA-influenced strut serves as a walking guide, taking the band toward the border of the blues in hiding ("All That Jazz"); and haunting and spellbinding sounds come to the fore as arco bass, guitar, and toms and cymbals invite the darkness in ("Give").

While divergent thoughts are presented throughout the album, certain truths remain clear: K's shrewd use of effects brings out extra layers of depth in this music, sensitivity is paramount, and nobody is shackled to a specific idea or location. The members of Lockout Station are free to roam together. And though that may sound like an oxymoron, the music says otherwise.