By DOUG COLLETTE
April 2, 2008
Sign in to view read count 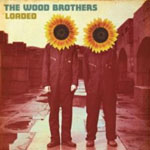 Like most of Loaded, The Wood Brothers' second album begins and ends with its respective companion pieces, "Lovin' Arms" and "Still Close," moving at a decidedly unhurried pace. The understatement at the heart of their approach distinguishes itself precisely because the sound is so quietly inviting.

Bassist Chris and guitarist Oliver Wood began their collaboration with the informal and deceptively ambitious Ways Not to Lose (Blue Note, 2006). Their second album expands upon its predecessor on every front, but a larger cast of accompanists and a more expansive selection of songs by no means lessen the insinuating effect of their music. Rather, this logical progression enhances the eccentric charm of the artists and their art.

The Wood Brothers' arrangements of outside material are absolutely ingenious. They expand the dramatic quality of Jimi Hendrix' "Angel," through the contrast of the reggae rhythm in the verses with the majestic chords of the intro, which also function as a refrain. The duo also changes up Bob Dylan's "Buckets of Rain" through circular guitar patterns, creating a hypnotic mood that offsets the whimsy at the heart of the tune itself.

Appearing late in the dozen tunes on this album, those covers keynote an expansive approach in The Woods' original material as well. The multi-leveled emotion in "Pray Enough" is reflected in the inclusion of drums, electric guitar and organ, the latter supplied by producer John Medeski. Yet, the chemistry so obvious between the brothers themselves allows the incorporation of other musicians without short-circuiting that sibling bond. Jennifer Choi's violin on "Postcards From Hell," for instance, injects a Cajun and bluegrass feel into the performance, helping extend a sensation suggested by the duo.

On their own songs, The Wood Brothers are as adept with their verbal turns of phrase as with the melody lines. The offhand nature of "Walkaway" reinforces the words while a sparse layering of electric guitars and brushed drums, courtesy of Billy Martin, reflect the subtleties of feeling in the playing as well as the writing. The effect is much the same on "Don't Look Back," where the fragile female harmonies of Frazey Ford underscore the ambivalence in the lyrics, not to mention offsetting the natural twang in Chris' voice, as he takes a turn on lead vocals.

Loaded demonstrates two principles of music at its most impressive. Just as a quality song will accommodate any number of memorable interpretations, so will a skillful band be able to integrate like- minded musicians and remain cohesive. The Wood Brothers are just such a band, working with that kind of songbook.

Lovin' Arms; Postcards From Hell; Pray Enough; Loaded; Walkaway; Don't Look Back; Twisted; Fall Too Fast; Angel; Buckets of Rain; Make Me Down A Pallet On Your Floor; Still Close.