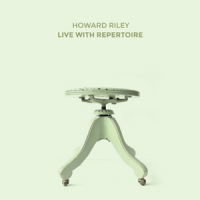 British pianist Howard Riley's previous album on No Business, the monumental The Complete Short Stories: 1998-2010 (2011), was a revelation to many, collecting together 6 CDs of stunning aphoristic improvisations. However on Live With Repertoire, as the title suggests, the pianist concentrates primarily on the songbook, particularly Monk, one of his touchstones along with Ellington. In the liners Riley explains that his working method sees him treat a gig as either with or without repertoire, depending on audience, ambience and how he feels. Something was clearly in the air in Leicester in November 2011 as the pianist generates an enthralling set from well-used materials, all captured in sparkling sound.

Even when standards provide the basis for a piece, Riley adopts a variety of approaches, sometimes cloaking accustomed melodies in swathes of embellishment as is the case with "I'm Getting Sentimental Over You," while at others giving more transparent readings such as "Ba-Lue Bolivar Ba-Lues Are," and all stations in between. Often his style tends towards the discursive, even florid on occasion. He rarely emphasises the rhythmic aspects of a tune, preferring rubato asides and tangential diversions, so the brief passages of time, like the stride feel at the conclusion of his own "Formerly" stand out when they occur.

Of the other three originals, "Now One" creates staccato momentum in octaves before deploying a tolling single keystroke, while the rippling atonality of "Now Two" closes with a lovely section similarly repeating what sounds like a purposely distorted note. "Monk's Mood" boasts a rolling bluesy undercurrent, while on "'Round Midnight" Riley subtly amends the familiar theme with dissonances Monk would have been sure to appreciate. The penultimate "Well You Needn't" forms one of the highlights, as a figure on dampened keys acts as a recurring motif during a freeform excursion, with the well-known tune blossoming only at the very end. This is the first recording to be released since Riley was diagnosed with Parkinson's disease. It goes without saying that no indication of that infirmity surfaces here. We should treasure Riley's artistry while we still can.

Monk's Mood; Ba-Lue Bolivar Ba-Lues Are; Darn That Dream; Now One; Ruby, My Dear; Now Two; Round Midnight; I'm Getting Sentimental Over You; Formerly; Body And Soul; Well You Needn't; Singing Off.