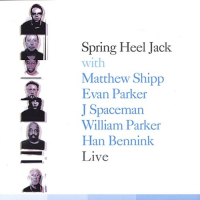 Spring Heel Jack, which has spanned a remarkably diverse range of sounds since its coming out in 1995, recently turned toward jazz (or post-jazz) improvisation as a medium for expression. John Coxon and Ashley Wales made one of the greatest electronica records of all time in Busy Curious Thirsty (Trade 2/Island, 1997), but over the course of four records for Thirsty Ear's Blue Series the duo has marked new territory.

Live documents 75 minutes of live performance in Brighton and Bath during late January of 2003. It's important to understand and respect the title of the record, because it has important implications for the contents therein. Rather than nicking at pre-recorded sounds, Spring Heel Jack participates here entirely in the moment, though interestingly enough it's very hard to discern their precise role much of the time. That's fair.

The all-star quintet assembled for this record includes four avant jazzers who need no introduction and one out rocker, guitarist J Spaceman (of the now-defunct group Spacemen 3, among others). Because two of the instruments are electric (Matthew Shipp's Fender Rhodes and J. Spaceman's guitar), the acoustic axis has a dramatic plugged-in counterpoint.

At times (as with the surge ten minutes into "Part II") the hard-hitting intensity of five improvisers all blowing hard morphs these voices into one seething mass of energy. But then at others, like the segment 27 minutes into "Part I," a light swinging groove takes over in the hands of bassist William Parker and drummer Han Bennink. Then some sort of delicate noise like a prepared piano joins Shipp and the pulse fades off, yielding a much softer arena for individual expression. Bennink gets his hands dirty here, though, lest you relax too far into your easy chair.

In the end Live is just as much a study of sound in motion as a series of dramatic contrasts. Take the gentle flute that floats in ten minutes into the first track. According to the personnel listing, the sound belongs to SHJ. But when a Moroccan flute (real or processed?) lends its loud nasal pinch a bit down the road, it spurs pure fire energy and trance. Where did these contrasting twins meet? What does it mean? Don't waste your time on the details. Keep your mind attuned to the group energy and the flow. Seven people on this record make it sound a lot like a big band, and that's saying a lot.