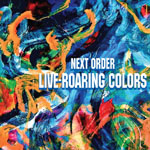 Building on the successes of Live-Powered NexusM (Lolo Records, 2005), Next Order's Live-Roaring Colors features many of the same markers as its predecessor. With another couple years under its belt, however, this twin-guitar, bass and drums quartet provides plenty of grist for fans of fusion whose tastes run equally towards the metallic edge of progressive rock and even the more melodic contemporary jazz of artists like Pat Metheny.

As was the case on Nexus, guitarist Yuji Muto is heard on the right channel, with Takumi Seino occupying the left. Muto remains the more aggressive player, prone to outbursts of wild abandon with a heavily overdriven sound, while Seino's generally cleaner tone and more lyrical nature makes for a combination capable of covering the considerable territory of Muto's five originals and three by Seino. But in the years since Nexus, the two guitarists, while remaining easily identifiable, have also found more common ground, with Muto displaying a more sophisticated harmonic language during his still rock- inflected solos and Seino, while not exactly becoming aggressive, has incorporated effects that broaden his own textural landscape, notably towards the end of Muto's take-no-prisoners opener, "Geppetto."

Seino's "B-612" references Metheny's innate melodicism, but there's a hint of Canterbury legend Phil Miller's oblique thematization. Bassist Atsumo Ishigaki and drummer Hiroshi "Gori" Matsuda" are as adept at visceral energy as they are greater understatement, supporting Seimo's lithe solo delicately but intuitively, building in power during Muto's fiery solo. "B-612" may open in the ECM territory of early Pat Metheny Group (sans keyboard), but Muto takes it places Metheny wouldn't approach until much later in his career.

As was the case with Nexus, what differentiates Next Order and gives it its real power is how, despite the sometimes aggressive nature of its approach and an emphasis on lengthy soloing, there's never a sense of anyone overstaying their welcome. Seino's "Simply 'Red,'" the longest piece at over thirteen minutes, unfolds at a relaxed pace. Both guitarists use looping to build a near-ambiece somewhat akin to Robert Fripp's soundscapes, but as Ishigaki and Matsuda enter this lengthy rubato intro, it gradually evolves into a time-based ballad. Muto's warm solo—combining lyrical lines with rich chordal harmonies—contrasts with Seino who reverts to an overdriven tone, supported by the rhythm section's shift to a more persistent backbeat building in energy and dexterity while never losing sight of the tune's simple structure.

With a title like Live-Roaring Colors it's appropriate that one of the greatest advances Next Order has made over Nexus is in the area of texture. There's no shortage of high octane playing all around, with Ishigaki delivering an impressively constructed solo on Muto's rockish "Synapse." But while reference points as varied as Metheny, John Scofield, Phil Miller and King Crimson continue to inform the group, Live-Roaring Colors is clear evidence of a group that is continuing to grow and develop a voice of its own.