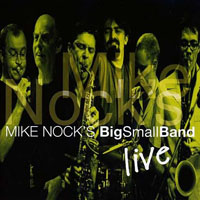 With relatively few recordings as a leader over a career that is now in its fifth decade, any new release from New Zealand pianist Mike Nock is an event. After living in the US for twenty years where, amongst other things, he was a member of the early fusion group Fourth Way, Nock returned to Australia. He has lived there ever since, becoming a leading figure as performer, educator, and mentor to up-and-coming musicians on the Australian jazz scene. He's also had a key role with the now-defunct Naxos Jazz imprint, where he recorded three albums as a leader and two with the New York Jazz Collective.

Nock has typically worked in small ensemble settings, so his latest record, Live , with his ten-piece Bigsmallband, is something of a departure. Still, the recording fits perfectly within the Nock oeuvre, with compositions that continue to demonstrate his broad reach, albeit this time in a context that gives him more colours on the palette than ever before.

Always the democratic leader, fans of Nock's occasionally oblique, forward-reaching but always thoughtfully constructed piano style may be disappointed by the relative lack of solo space that he afford himself. But Live is more about composition, collective improvisation and ensemble than being simply a showcase for Nock's distinctive style—for that, check out his trio release, Changing Seasons (DIW, '03), featuring bassist Brett Hirst and drummer Toby Hall, the core of the Bigsmallband rhythm section.

Nock's charts comfortably sit on the knife's edge between through composition and loose extemporization, liberally incorporating diverse ideas without losing sight of his own voice. "Zalktis," for example, blends African polyrhythms, a canonic section inspired by Gorecki and an irregularly-metered collective improvisation section. "Current Reality" may be based on an up-tempo Latin jazz groove, but there are multiple shifts in feel before the tune settles into a solo section that features young guitarist Cameron Deyell, who, while informed by John Scofield in terms of sound and approach, is not without some tricks of his own. Like another young Australian guitarist, James Muller, Deyell is clearly someone to watch.

Interestingly enough, with Nock's complex and multi-hued compositions, it is the sole non-Nock piece that may be the recording's highlight. "Three Portraits of a Simpleton," by emerging composer Andrea Keller, begins as an impressionistic piece with Nock soloing over rich long tones from the brass. After breaking down into an a capella section by Nock, Toby Hall's abstract drum solo leads into a somewhat funky irregular-meter groove that is peppered with shots from the rhythm section, introducing a lengthy solo by trumpeter Simon Sweeney that displays elements of Kenny Wheeler, albeit less melancholy in tone. And that's only the first half of the eleven-minute piece.

Unpredictable yet accessible, Live is a high point in Nock's career, a recording that presents all his qualities in rich profile: compelling writing, an intuitive strength as an accompanist and soloist, and a broader sense of equality within the ensemble. Unquestionably one of the best large ensemble records of the year.

Visit Mike Nock on the web.

Current Reality; Dance of the Global Village; COurting the Edge of Angst and Ecstasy; Nu Upline; Three Portraits of a Simpleton; Slum Goddess; Open the Window (And Let in the Moon); Zalktis