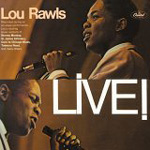 With a talent for versatility, Lou Rawls can sing just about anything from jingles for beer commercials to spirituals (check out a recent reissue of The Pilgrim Travellers Featuring Lou Rawls on Mighty Quinn). In some ways, this chameleon-like character can be more of a hindrance than an asset. It's meant that over the years his commercial endeavors, particularly from the disco era, have tended to overshadow earlier gems that reveal his way with a jazz or blues line. Yet while at Capitol Records in the early to mid-'60s, producer David Axelrod found a myriad of disparate projects for Rawls to sink his teeth into, many of which lean heavily on the solid support of jazz musicians and quality studio orchestras and big bands.

Way too long unavailable, Live! has largely been revered as one of Rawls' best albums by those in the know. Although its title suggests something somewhat different, this 1966 set was actually recorded in the studio before a small audience. Still, Rawls treats it like one of his usual sets, and his monologues and tune openers give the session much of its character. It also doesn't hurt that his backing quartet includes guitarist Herb Ellis and bassist Jimmy Bond.

The material ranges from blues classics to the day's current hits, such as "The Shadow of Your Smile and "The Girl From Ipanema. In fine form, Rawls imbues each tune with that deep timbre and seductive charm that has always been part and parcel of his musical muse. Here in its most unfettered form, Rawls' performance speaks so effectively that even if he had not recorded another thing, his reputation would be secured with Live!

Stormy Monday; Southside Blues/Tobacco Road; St. James Infirmary; The Shadow of Your Smile; I'd Rather Drink Muddy Water; Goin' To Chicago Blues; In the Evenin' (When the Sun Goes Down); The Girl From Ipanema; I Got It Bad and That Ain't Good; Street Corner Hustler's Blues/A World of Trouble.