By Dan Bilawsky
December 31, 2016
Sign in to view read count 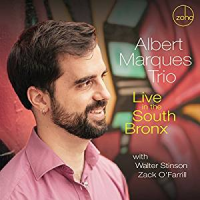 There's something uncommonly special about the way that the young Spanish pianist Albert Marques manages to wed elegant expressions with rumbling designs in his work, limning the very nature of his being and his adopted Bronx turf through fingers and keys. He's "tough but sweet" according to Arturo O'Farrill, who penned the liner notes for this project, and the music found herein tends to reflect those attributes, corroborating that assessment in the process. There's both a rugged quality and a cultivated sense of beauty projected by this album.

Live In The South Bronx is true to its name, presenting music captured in concert at that New York borough's Pregones Theater in July of 2015. It finds Marques and his trio mates—bassist Walter Stinson and drummer Zack O'Farrill—delivering eight numbers that touch on various rhythmic, harmonic, and melodic aspects of the Afro-Latin spectrum. But don't mistake this pianist and his partners for linguistic purists. These are outside thinkers and risk-takers, fearsome and shrewd in their expression of different musical tongues. They're knowledgeable enough to know that they can mutate language without making it incomprehensible and limber enough to bend ideas to their will without breaking anything.

Original music dominates here, with Marques penning half of the tracks on the program and his colleagues delivering one apiece. These songs, at one time or another, utilize odd meters, angular lines, loose-limbed grooves, and surprising turns, balancing out grit and wit in their unfolding. But each one is an island of expression unto itself. One may marry anxious emotions with pure joy ("Canco Pel Pare"), another may be purposeful and powerful in the way it speaks and evolves ("Jazz Is Working Class"), and a third may take a more reflective approach to communication (Stinson's "Alan Watts"). Even the covers—a Spanish-tinged take on Wayne Shorter's "Iris" and a heart-and-groove journey through Bill Withers' "Ain't No Sunshine"—manage to sidestep expectations and speak on their own terms. The Albert Marques Trio certainly has its own sound, but there's a great degree of flexibility to be found within the way that sound is presented from song to song. This is smartly unsettled music full of heart.