Seth Meicht and the Big Sound Ensemble: Live in Philadelphia

By John Sharpe
January 9, 2015
Sign in to view read count 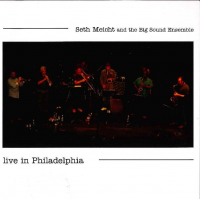 Philly tenor saxophonist Seth Meicht has created a crack little big band which combines nifty arrangements and adventurous expression in his Big Sound Ensemble. Meicht has largely passed under the critical radar since Illumine (CIMP, 2006), surfacing only for the occasional high profile gig in NYC, including the 2009 Vision Festival. This recording in front of a hometown crowd, inexplicably dated 2008 on the sleeve although actually captured on 19 September 2009, assembles a stellar cast for a generous program of compositions by Meicht along with two cuts by his brother trumpeter Aaron.

The name is no idle boast. Meicht extracts an astonishing richness from the layered voices and interlocking lines exclaimed by his 8-piece outfit. On saxophones, Meicht has brought together a squad of distinctive characters in Darius Jones on alto and Charles Evans on baritone to flank his own tenor. Alongside Aaron Meicht, the brass comprises illustrious trombonist Steve Swell and maverick trumpeter Herb Robertson, each one man horn sections in themselves. Stoking the fires, bassist Adam Lane (who runs his own equivalent unit which punches above its weight in the Full Throttle Orchestra) and drummer Mike Pride both swing ferociously and float menacingly as the moment demands.

While each member is an accomplished improviser, they also dig into Meicht's charts with gusto. One of the leader's achievements is to make the notated elements sound organic and unforced. The lengthy multipart "The Sounds We Make" serves as an introductory handshake with the individual bandmembers, who set out their wares in a profusion of lilting melodies, tight riffs and reflective interludes. Meicht hits on a winning gambit by ramping up the excitement quotient with simultaneous solos as on "Doctor Murphy," where Swell and one of the trumpeters exchange blows.

Likewise on "Pentimento" all three reeds intertwine in glorious polyphony. A hymn-like kwela feel pervades "the beaten have little to bargain" which elicits deserved calls for an encore from the small but enthusiastic audience. Meicht satisfies the clamor with the band's signature number "Big Sound," which recalls early Sun Ra anthems in its jump and spring. While the unvarnished CIMP sound means lower recording levels than some will be accustomed to, that shouldn't constitute an obstacle to the enjoyment of this rousing date.

The Sounds We Make; Doctor Murphy; River Watch; Pentimento; "Once they notice you...they never completely close the file."; the beaten have little to bargain; Big Sound.