John McLaughlin and The Heart of Things: Live In Paris 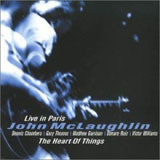 You just knew this band was going to put it all together. This is the Heart of Things album Verve should have released first. Yes, their debut studio effort was good. But in all facets it is humbled by this live recording.

The track list does not suggest much excitement. After all, the only new composition on the album is "Tony", a tribute to the late drummer Tony Williams. "Seven Sisters," "Fallen Angels" and "Acid Jazz" all make a return visit from the debut album. "Mother Tongues," an old JM Trio stalwart, and Gary Thomas' "The Divide" round out the set. Many listeners hoped to hear more new material, such as the kick-ass version of "Jazz Jungle" which the band had performed during their short European tour. But, alas, it's mysteriously absent, along with another featured tune from the tour, "Stella By Starlight." What a bummer.

An actual listen to Live in Paris brings an entirely new appreciation to the music. McLaughlin afficionados have had a long running debate about McLaughlin's use of a ring-modulator to distort his guitar. This reviewer has always been firmly in the "nay" camp. But here, the ring-modulated guitar, used sparingly as it is, is the absolute right choice! A vamp on "Acid Jazz," leading into a blistering show-ending duel with drummer Dennis Chambers, derives its entire character from the ring-modulator.

As usual, Chambers turns in an outstanding performance, and his solo turn on "Tony" is powerful and meaningful music. It is the essence of a heartfelt tribute. Matt Garrison provides the bottom end, and not too few bass flourishes. The bassist is especially up front on "Mother Tongues." Otmaro Ruiz, a welcome addition, takes over for Jim Beard on keyboards and synthesizers. He and McLaughlin engage in a furious call and response passage on "Mother Tongues" that you hope will never end. He also adds a beautiful piano intro to "Tony."

The inclusion of Gary Thomas on sax is an enigma. It's hard to tell if he's an average player or a genius. The confusion is caused by the fact that his playing seems so effortless. But I do really like his playing on this album. The composition he contributes, "The Divide," stands as a dramatic high point that provides fodder for all of the musicians to let loose. Thomas continues moving to the "great" column, album by album. Victor Williams adds his percussion shadings to enhance the overall sound.

There is something about this band that you can't quite put your finger on. The group plays exciting and uplifting music. But at the same time, a dark and brooding undertow runs through it all. While I may not be able to explain it, I sure as hell like it.

And finally, what can you say about JM? To be as fresh and vital as he sounds on this album is a true testament to his lifelong devotion to the music. The compositions are strong. The band is powerful and tight. The crowd adds to the ambiance. Although more new material would have made a difference, this is an outstanding and refreshing high-energy fusion outing from the Heart of Things.