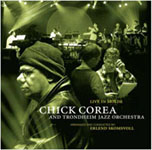 2006 seems to be a significant year for jazz's elder statespersons. Pianist Andrew Hill has seen a year full of recordings: new music, reissues and previously unreleased material, as well as an outstanding tribute by guitarist Nels Cline. Chick Corea, who's a few years younger than Hill, has released a new record and toured with trios focusing on his back catalog. Super Trio (Stretch, 2006) documented a tour where the pianist was clearly in control of the arrangements; however, Live in Molde is an entirely different affair.

This live performance recorded at Norway's 2000 Molde Jazz Festival finds Corea in the company of a fourteen-piece ensemble of musicians he didn't previously know, performing arrangements by Erlend Skomsvoll, also previously unknown to him. He traveled to Norway to perform Skomsvoll's modernistic charts with only one rehearsal, manifesting a degree of confidence that's amply rewarded on a set of material dating as far back as "Matrix, from Now He Sings, Now He Sobs (Blue Note, 1968).

The majority of the Trondheim Jazz Orchestra's members will be equally unknown to most readers. Still, trumpeter Matthias Eick and trombonist Øyvind Bræke will be familiar to those who have followed ECM recordings by artists like Jacob Young, Trygve Seim, Iro Haarla and The Source. But from the first notes of Corea's "Crystal Silence, where soprano saxophonist Tor Yttredal and Corea enter in duet with a sense of drama unheard of in previous versions of this classic tune, it's clear that Skomsvoll is prepared to take significant liberties with Corea's malleable material. That the tune should ultimately adopt a greater pulse which seems paradoxical to its title is further evidence of Skomsvoll's out-of-the-box thinking.

The orchestra, fuelled by bassist Steinar Raknes and drummer Håkon Mjåset Johansen, swings mightily on "Windows. Still, the long and slightly skewed Frisell-like sustained notes of guitarist Hans Chr. Frønes support Corea's thoughtfully constructed solo in a way that's rarely heard in large ensembles. By transcribing Corea's solo from the Now He Sings version of "Matrix for Øystein Baadsvik's tuba, Skomsvoll provides another example of how he respects his source but also finds new meaning within it. Such is the case on the passage following tenorist Kjetil Møster's potent solo, where Corea joins Frønes, Raknes and Johansen in vivid and open-ended free play.

Skomsvoll fleshes out the one-minute intro of the titular track from Return to Forever (ECM, 1972) into a rich six-minute tone poem that completely eschews the original's Latin groove, and in doing so again demonstrates his ability to find the greater possibilities inherent in the simplest of ideas. These musicians' individual solo skills match their capabilities as team players, and they rise to fulfill imaginative reinventions of some of Corea's best writing. Given those features and, of course, Corea's own distinctive playing, Live in Molde stands out as one of the year's best large ensemble recordings.