By GEANNINE REID
January 7, 2021
Sign in to view read count 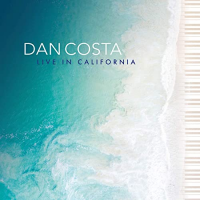 Born in London into an Italian-Portuguese family, Dan Costa studied classical piano for six years at the Académie de Musique Rainier III in the south of France, in addition to jazz studies. In 2010, he was awarded a diploma with merit at the Liverpool Institute for Performing Arts in the UK. His interest in Latin music next led him to study at the Escola Superior de Música e Artes do Espectáculo in Portugal. He graduated in jazz piano with an award for outstanding achievement in 2015. He received a merit grant to study Brazilian music at Universidade Estadual de Campinas in São Paulo. Finishing school was Berklee College of Music in Boston.

Live in California is the result of a string of dates in support of Costa's sophomore release. The date was recorded at Kuumbwa Jazz in Santa Cruz, CA, in early 2020. The album is filled with Costa originals except three tunes by Brazilian composers such as Antonio Carlos Jobim and Roberto Menescal. "Baião," a Costa original, has a flowing melody that intertwines beautiful, cascading lines. "Garota de Ipanema," one of the most timeless songs in the Jobim songbook, is given a caressing and tender rendition by Costa, highlighting the splendor of the melody. Costa glides into each moment and nuance while keeping his left hand firmly stating the tune's driving rhythm. It is a real treat to hear how he approaches the familiar song's inner voicings. Another tune that offers substance is "Tempos Sentidos." Bubbling-under rhythm creates constant forward motion on which Costa delicately dances.

Live in California offers a distinctive look at Costa's ideas from both composing and playing standpoints. This is the majesty of solo albums, the opportunity to look inside the player's heart, to observe their ability to communicate without any hindrance of sound or cluttering of instrumentation. A worthy listen that will satiate any Brazilian jazz aficionado.