By Bruce Lindsay
February 23, 2019
Sign in to view read count 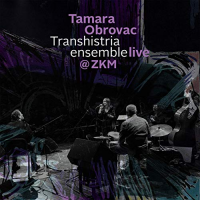 In November 2016, in celebration of her 20-year recording career, Tamara Obrovac took to the stage of the Zagreb Youth Theatre with the Transhistria Ensemble. In front of a sold-out crowd, the Croatian singer and composer performed a concert recorded as [email protected]. The two-disc set features 11 of Obrovac's compositions, written alone and in collaborations, taken from her back-catalog of nine albums, all performed with passion and style by the singer and her fellow musicians.

Obrovac describes her music as "ethnically-inspired contemporary Mediterranean jazz," a description that does justice to her unique sound as well as the ensemble's international line-up: Slovenian bassist Ziga Golob and Croatian drummer Krunoslav Levacic (both band members since 1996), Slovenian guitarist and mandola player Uros Rakovec (a member since 2003), and Italian accordionist Fausto Beccalossi (who joined in 2005). Many of these compositions have a timeless quality, as if they emerged from Croatian folk traditions: the combination of Beccalossi's accordion and Rakovec's mandola does much to create this feeling. However, Obrovac's phrasing and the rhythms laid down by Golob and Levacic add a contemporary, jazz-infused edge.

The varied set opens with "Touca La Louna (Touch The Moon)," notable for its slinky, sensual rhythm and romantic interplay between vocal and accordion. The downcast, intense but beautiful "Se Me Ra Morta Privari (If Death Was To Trick Me)" features a lovely melody from Rakovec's guitar. "Kazeta (Little House)" showcases the interplay between voice and accordion, while the ballad "Sama (Alone)" matches Obrovac's impassioned vocal with accordion, bass, and mandola to create a melancholy and mysterious number. The concert setting gives all of the performers a chance to open up in extended solos, with many highlights: Levacic's solo on "Daleko Je," Rakovec's guitar solo on "Touca La Louna," and Golob's mood-perfect arco solo on "Se Me Ra Morta Privari" are just three.

This is an album characterized by passion from all of the players, but especially Obrovac. Even run-of-the-mill songs would sound convincing and evocative in the hands of the Transhistria Ensemble. The combination of top-class performers and Obravac's superb compositions, along with excellent sound quality, ensures that [email protected] is an exceptional live album.