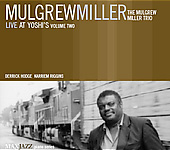 Sometimes a live performance is a singular experience—not capable of being relived, and consequently not meant to be documented. Other times it's so vivid and so rich in emotion that it bears repeat visits. Pianist Mulgrew Miller's '04 trio release, Live at Yoshi's Volume One was one such show—so worthy, in fact, that its very title was enough to create immediate anticipation for a followup.

A year later, Live at Yoshi's Volume Two has clearly been worth the wait. It's filled with the same sense of adventure, yet within a wholly mainstream context. Miller, a veteran player with over 400 releases as either a sideman or a leader, delivers a seventy-minute set that again proves that mainstream doesn't have to mean predictable. It is, in fact, Miller's very ability to surprise, even on standards like the Brown/Stept/Tobias classic "Come Love and his solo rendition of Rodgers & Hart's "It's Easy to Remember, that makes his music worth revisiting—and often. Even in the stripped-down context of the piano trio, Miller, bassist Derrick Hodge, and drummer Karriem Riggins manage to create such a multi-layered experience that new facets continue to reveal themselves time after time.

Miller's prodigious talent is always on display, yet never superfluously so; his comfortable stretch on the set's seven compositions is testimony to his intuitive grasp of solo development, which always ensures a meaningful arc and a fully-formed narrative. On "One's Own Room, the only original composition of the program, Hodge's darkly muscular opening solo leads into a simple ostinato-based and almost hypnotic modal concern for Miller that never loses interest, momentum, or excitement, despite its length.

Elsewhere the trio swings hard. Opening with a burning look at Victor Feldman's "Joshua from Miles Davis' Seven Steps to Heaven, the group comes charging out of the gate. Miller miraculously deconstructs what was originally done on three instruments—piano, saxophone, and trumpet—so that, by virtue of implication, it remains as harmonically rich as the original. While staying more towards the centre than Herbie Hancock, who would ultimately take the piece to more abstract places when performing it live with Miles, Miller's powerful delivery and constant sense of invention makes it no less compelling.

That Miller should choose to open the set with "Joshua, featuring a suitably powerhouse solo from Riggins, and close with "Citadel from the late Tony Williams—who was the drummer on the original recording of "Joshua —seems more than just happenstance. Miller played in Williams' groups until his death in '97, and while Miller was already an established player—evidenced by work with artists including trumpeter Woody Shaw and drummer Art Blakey—his twelve-year tenure with Williams is what propelled him to greater prominence. While Live at Yoshi's Volume Two is dedicated to pianist James Williams, it could also be seen as fitting homage to Tony Williams, whose last years were equally defined by finding ways to keep the mainstream contemporary and relevant.