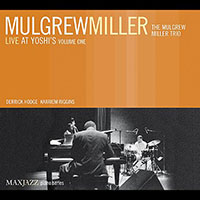 With the multiplicity of mainstream records out there mining the standards songbook, what does it take to differentiate oneself from the crowd? Well, in the case of pianist Mulgrew Miller, it is about formidable virtuosity that never loses site of the inner truth of the music; it's also about injecting a little surprise—not too much—where one would least expect it. All too often mainstream artists treat the source material with too much reverence and, at the end of the day, deliver competent but impersonal performances. Not so with Miller, whose latest release, Live at Yoshi's Volume One , takes a break from his reformed Wingspan group and returns to the trio format that has characterized over half of the twelve recordings he has released in his twenty-five year career.

With a discography of over four hundred records and still growing, Miller may be the busiest pianist in jazz. His deft playing has graced albums by artists as young as Kenny Garrett and as established as the now-departed Art Blakey and Woody Shaw. With blinding technique that manages to blend the traditionalism of Oscar Peterson with the adventure of McCoy Tyner, he may stay within the mainstream for the most part, but every now and then throws in moments of dissonance, creating subtle tension that is never so obscure as to detract from the overall accessibility of the music.

And he swings. With young bassist Derrick Hodge and drummer Karriem Higgins, who has been working with Miller since '95's Getting to Know You , Miller's work is characterized by an innate sense of groove that ranges from the intense on his own "Pressing the Issue," the only non-standard of the set, to the lighter, upbeat fare of "If I Were a Bell" and Woody Shaw's "The Organ Grinder." Hodge and Higgins are clearly locked into Miller, providing in the pocket support to Horace Silver's tender ballad "Peace," the Brazilian-inflected Jobim classic "O Grande Amor," and the serious walk of "What a Difference a Day Makes."

But at the end of the day this is really Miller's show. He has no shortage of ideas—the shortest piece is just under eight minutes—and, while his staggering technique and harmonic invention are always on display, he remains true to the material's essence and, surprisingly given that he takes the lion's share of the solos, consistently interesting. There are no lulls or weak spots here; every solo is constructed with care and tells a unique story.

Proving that mainstream jazz can still be unpredictable within a parametric range, Live at Yoshi's Volume One shows Miller at the height of his abilities, supported by a rhythm section that, while never straying too far from a traditional role, manages to incite him to greater heights. The implication from the album title is that there is more to come, and one can only hope that it is sooner rather than later.

Visit MaxJazz on the web.

Track Listing: If I Were a Bell; Waltz for Monk; O Grande Amor; The Organ Grinder; Peace; Don't You Know I Care; What a Difference a Day Makes; Pressing the Issue