Home » Jazz Articles » The Idea of North: Live at The Powerhouse

The Idea of North: Live at The Powerhouse

By Barry O'Sullivan
November 23, 2007
Sign in to view read count 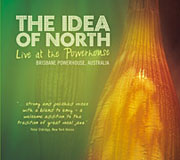 Like the great vocal groups that have preceded them such as Lambert, Hendricks and Ross, Singers Unlimited, The Swingle Singers and The Manhattan Transfer, The Idea of North has learned from the best and taken the art form to new levels with its Live at The Brisbane Powerhouse CD/DVD combo.

This vocal a capella vocal ensemble just swings and swings with impeccable harmonies and an understanding of each others' vocal parts. The breadth of the group's performance is its most remarkable characteristic, never stopping in offering something new with tracks including "Neat Surprise, "Rachael, and "Sister Sadie as Horace Silver would never have heard it.

The group sings as if they've nothing to prove. The timbre of vocalists Andrew Piper, Nick Begbie, Trish Delany Brown and Naomi Crellin adds depth and texture to many of their great interpretations, with well-textured arrangements which, in some cases, are better than the originals.

The Idea of North has defied time, and the short lifespan that is the inevitable fate of so many talented ensembles, by continuously producing recordings of quality. Live at The Brisbane Powerhouse is a classic, evoking the kind of thrill only possible while listening to music that is to be treasured and held in the heart long after the curtain comes down.

The exquisitely produced concert production on DVD only confirms the reputation of The Idea of North as one of Australia's favorite vocal acts. It contains bonus special features, a backstage pass, exclusive tour footage, a stills gallery, a biography and a discography as well as 5.1 surround sound.

Mas Que Nada; But Not For Me; Blue Bayou; Neat Surprise; Rachael; Fields Of Gold; Sister Sadie; His Eye Is On The Sparrow; When All Is Said and Done;Just a Closer Walk With Thee; No More Blues; Eleanor Rigby; Jackie;Isn't She Lovely; Stayin Alive.

About The Idea of North

Barry O'Sullivan is a jazz broadcaster, music reviewer, and feature article contributor which is broadcast twice weekly and nationally across Australia via the Community Radio Network and streamed live each Friday from 12.00pm AEST & [email protected]