The Cloudmakers Trio: Live At The Pizza Express

By BRUCE LINDSAY
September 9, 2012
Sign in to view read count 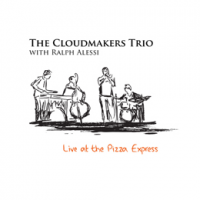 The Cloudmakers Trio brings together three of the most inventive players on the UK scene: vibraphonist and band originator Jim Hart, drummer Dave Smith and expat American bassist Michael Janisch. On its debut, Live At The Pizza Express (released on Janisch's Whirlwind Recordings), the band is joined by New York trumpeter Ralph Alessi. It's a beautifully recorded set, although the live atmosphere of the Soho club is generally absent, with just a couple of bursts of applause to indicate the presence of an audience.

ADVERTISEMENT
The album is billed as The Cloudmakers Trio with Ralph Alessi, but this is very much a quartet performance. Hart formed the trio having already had the idea to collaborate with Alessi, and the trumpeter is also involved as a composer, contributing "Morbid Curiosity"—a much jollier tune than the title suggests—and taking shared credit with the Trio for "Improv." He's also an empathic frontline partner for Hart, the two men moving readily from duets, in which each complements the other's sound, to phases where a more competitive spirit seems to take precedence.

Smith and Janisch form a rhythm section that is equally at home as the band's powerhouse or as a more subtle and fluid partnership. On the opening section of Hart's "A Door In The Wall," Hart and Alessi's central theme is engagingly simple, while Smith and Janisch underpin the lead players with more complex rhythm patterns.

"Improv" is what it says it is: a five-minute improvisation which Hart begins with a sparkling vibes solo. Thelonious Monk's "Bye-Ya" is tons of fun, with Alessi's staccato and angular opening solo then reflected by Smith in an extended trumpet/percussion duet. Three minutes in, first Alessi and then Hart pick up the tune's familiar melody line and all four musicians take flight.

The band recorded Live At The Pizza Express in July 2010. In the two-plus years that it took to release the record Hart, Janisch and Smith have continued to collaborate with saxophonists such as Logan Richardson and Antonin-Tri Hoang. This album may well capture the Cloudmakers/Alessi collaboration's only performance, but the rich vein of possible future collaborators offers some mouthwatering prospects. It would be fascinating, also, to see where the trio might go on its own.

Passwords; Morbid Curiosity; A Door In The Wall; Improv; Bye-Ya.