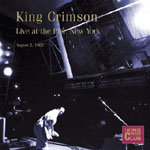 Live at the Pier, New York, August 2, 1982 is the 37th entry in a series of King Crimson Collectors Club releases from DGM Mail Order which, along with the download-only DGMLive, has been documenting King Crimson's five touring incarnations from 1969 through 2003 with archival live releases (a new line-up is preparing for a brief tour in August, 2008, celebrating Crimson's 40th anniversary; what's to come, however, is anybody's guess). With sources ranging from lo-fi audience to close-to-commercial soundboard and multi-track recordings, some of the KCCC titles are definitely only for Crimson enthusiasts—and in some cases, true die-hard ones at that. Live at the Pier, however, is a crisp and clear recording that finds 1980s Crim about half-way through its near four year run. And it's a hot one.

With five of the ten tunes culled from the group's just-released second disc, Beat (DGM, 1982), the new wave edge-meets-gamelan-meets-minimalism ethos of 1980s Crim had evolved considerably from its early days as Discipline, documented on the first disc of The Collectable King Crimson Volume Two (DGM, 2007). This may be the least expansively improvisational Crimson line-up, with no extended group improvs heard in prior and subsequent incarnations. But that doesn't mean that this more song-friendly, groove-happy Crimson didn't take risks each and every night. The differences could be as subtle as guitarist/Crimson co-founder Robert Fripp's gradually evolving elliptical patterns behind fellow guitarist Adrian Belew's solo of reckless abandon on "Waiting Man," or more direct during drummer Bill Bruford's lengthy electro-acoustic solo at the beginning of the lyrically obtuse "Indiscipline."

Comparing the common songs between The Pier and Philadelphia from just three days earlier and heard on the second disc of The Collectable, the group did stretch out a little more with Belew's ad lib of "New York, New York" on "Indiscipline," some added mayhem on a slightly longer take on one of the few pre-1980s songs this Crimson would perform, "Larks' Tongues in Aspic: Part II," and a lengthier solo from Fripp on the log drum-driven "The Sheltering Sky." What made 1980s Crimson so unique was its ability to challenge even the committed prog fan, but in a most approachable way; it was music that you could dance to...as long as you weren't challenged by moving your feet in 21/8.

It's also a performance that helps dispel a common (and unfounded) misconception that Belew, the singer, was merely aping Talking Heads' David Byrne. As good as Byrne was and is, he could never match Belew's gritty delivery of a definitive version of "Neal and Jack and Me" that's shorter than the DGMLive download from The Roxy in November, 1981, but more open-ended than Beat's considerably more concise studio take.

Live at the Pier, with its greater emphasis on Beat's repertoire, is a strong adjunct to The Collectable's Philadelphia show and, with equally excellent sound, deserves to be heard by more than just undying Crimheads.