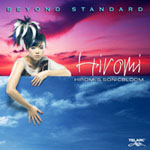 There's only one problem reviewing an album by Hiromi Uehara, but it's a big one.

You can quickly run out of superlatives.

On Beyond Standard, her fifth album and the second one under the group name Hiromi's Sonicbloom, the always adventuresome pianist doesn't so much pay tribute to standards such as Duke Ellington's "Caravan" and Rodgers and Hammerstein's "My Favorite Things" as break them apart, put them back together in a way that best pleases her and generally deconstruct the whole idea of paying homage to old songs.

What's the point of slavishly recreating note-for-note an old chestnut like "My Favorite Things"? It's not as if it can be improved, so why not just have some fun with it?

With the addition of guitarist David "Fuze" Fiuczynski, the band is able to go places it had previously been unable to on Brain (Telarc, 2004) and Spiral (Telarc, 2006), which is most evident in the reworking of Uehara's own "XYZ." The song is reincarnated here as "XYG," or "reborn with guitar," as the track notes indicate.

Fiuczynski's guitar excursions seem more attuned to his band mates here than on his debut with Hiromi's Sonicbloom, the ambitious, but occasionally messy, Time Control (Telarc, 2007). Fiuczynski can play his axe like nobody's business, but is guilty of overplaying on occasion and pummeling the listener with a sonic assault. He hasn't mellowed on Beyond Standard as much as he has learned the virtues of restraint.

"XYG" and a torrid version of Jeff Beck's fusion classic "Led Boots" not only give Fiuczynski ample opportunity to stretch a bit, their inclusion faithfully keeping with her refusal to be pigeonholed into any tidy categories. The rhythm section of bassist Tony Grey and drummer Martin Valihora deserves a shout-out or two as well as both are as versatile and virtuosic as their band mates.

It must be a matter of synchronicity that, at the time when the power quartet of Chick Corea, Al Di Meola, Stanley Clarke, and Lenny White are touring again as Return to Forever, Hiromi's Sonicbloom is making a serious bid to be the Young Turk, picking up where RTF left off and taking it even further.

Because this is Hiromi we're talking about here, there has to be at least one slightly loopy example of inspired insanity, and here it's the nearly six-minute solo piano of "I've Got Rhythm" that is equal parts dazzling and dizzying.

This is not just a good album; it's a fun album. The absolute nuttiness, yet undeniable proficiency and technique on display on tracks like "I've Got Rhythm" and "Claire De Lune" serve as cheerful additions to Uehara's efforts on Beyond Standard.

At some point in her career, Hiromi Uehara may mail it in and make a half-hearted or lousy record. But so far she's five-for-five in producing music that is unfailingly brilliant, innovative, radiant and clever. Hiromi's Sonicbloom is a shot of adrenalin for tired musical tastes.