By GORDON MARSHALL
May 9, 2010
Sign in to view read count 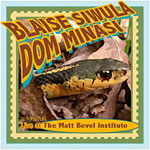 Dom Minasi is an acutely sensitive guitarist with an oblique approach and an aim to please, plucking his way through runs with persistence and nerve. His live duet with saxophonist Blaise Siwula sums these qualities up neatly, in configurations that unfold and build up melodically through a set that, by the end, is enveloped in a glorious buzz.

A paradox is at work within Minasi's style. His lines underscoring Siwula's sax passages have a geometrical torque, but he inflects them with a romantic tremolo betraying an almost Italian folk feel. As the album progresses, the latter quality takes increasing precedence, giving the compositions a cumulatively greater melodic depth.

"Circle Down," the third track, is where the lyricism starts to soar; chromatic for the most part, but with Minasi inserting some extended major chords, which Siwula bends into a blues-inspired sound. The duo then somehow takes it into an uncharted place in the American songbook and out again, all the while circling the whole audible scalar range of their instruments.

"Strange" starts with a hint at Charlie Parker and Dizzy Gillespie's "Salt Peanuts," but then dips in tempo to a ballad, soon shifting again into a more aggressive mode. Midway through it picks up a darker tone that the duo carries into later numbers; exuberant overtones also crop up, however, and it is this contrast that gives the overall set its effervescent afterglow.

These musicians puzzle their parts together as neatly as the four hands of a piano duet. They support and bolster each other, and each blaze courses the other follows when new fire is called for. A seasoned elemental balance belies the wild dips and turns in style and tone of the individual songs. However far apart the pair travel, their rapport is so keen that they always stay within mutual earshot—and sympathetic shooting range.

Tendencies in Tandem; The Vampire's Revenge; Circle Down; Strange; King Tut; What Monk; The Day After Next.