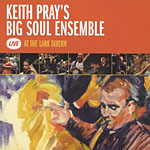 Live recording can be a mixed blessing. On a live album, an artist has an opportunity to capture the raw energy created in performance before an audience. When the band is cooking and the audience is whooping it up, it is clear that while music is made in rehearsal halls and recording studios, it lives onstage. On the other hand, recording live presents its own unique set of challenges. Getting the best possible sound in the controlled environment of the studio is one thing. Getting it in a room not designed for optimum acoustics and filled with noisy patrons is another thing altogether. And, of course, every song is a first take. A bad night on the bandstand could turn into a wasted evening of recording as well.

When it works, however, the results can be spectacular, as in the case of Live at the Lark Tavern by Keith Pray's Big Soul Ensemble, an album which perfectly captures the group in the act of blowing the roof off this intimate upstate venue.

The album starts off with a high-energy performance of pianist Joe Gullace's composition "Elements," a churning exercise in group chemistry. The brasses and reeds exchange phrases over a tight rhythm section which features the composer herself on piano. Keith Pray's energetic alto solo keeps things moving, while tenor saxophonist Brian Patneaude and trumpeter Chambers, Herbert & Ellis - vocalists each contribute concise but passionate solos. The whole thing pulses with power before coming to a stunning close.

"Walkin' the Dog" is not the Rufus Thomas novelty hit, but rather a Basie-esque mid-tempo shuffle that opens with a walking bass performed with élan by Lou Smaldone and tasteful piano interjections from Dave Gleason. "Walkin' the Dog" also features a wonderfully laid-back solo from tenor saxophonist Lee Russo.

One of the album's many highlights is "Renee," a gorgeous composition by Kevin Tkacz which features some incredible ensemble work from the brasses and reeds, as well as exceptional solos from Russo, Gleason and Smaldone. Pray's composition "The Other Funk" begins with a mournful brass section playing what sounds like a quote from either Dire Straits or the Police before launching into a tasty medium- tempo groove that owes more than a little to Fred Wesley and the J.B.s.

The album's closer, a brisk take on saxophonist Patneaude's "Change," features an outstanding solo by the song's composer, as well as a lyrical flugelhorn solo by Lambert.

The recording is not perfect. At times, the brasses seem a little low in the mix, almost as though the group were playing around a single mic stand (which is clearly not the case, as the piano and bass are very well miked). This doesn't detract from the listening experience, however. Instead, it helps create a sense of space, as though sitting at a table near the bandstand.

Alto saxophonist Keith Pray has been appearing with this group at Tess's Lark Tavern in Albany, N.Y., on the first Tuesday of each month for some time now, and he has gathered the absolute cream of upstate New York's jazz talent for this endeavor. For those who haven't been to see them live, this album is a perfect opportunity to hear the band. For those who make the monthly pilgrimage, this album is a perfect souvenir. Either way, this is some good stuff.

Elements; Walkin' the Dog; Transconfiguration; Renee; The Other Funk; I Remember Roland; Yet to Come; The Gate ( A Portrait of the Mohawk); Change.