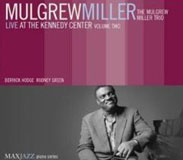 Mulgrew Miller was once opined as being one of the most underrated pianists in jazz, belonging to a middle generation of musicians between the 1950s-'60s masters and the "young lions of the 1990s. Proving patience is a virtue and there is something to be said for simply doing one's job consistently (citing Cal Ripkin, Jr.) Miller is in the midst of making the finest music of his distinguished career. Live at the Kennedy Center Volume 2 completes Miller's inauguration of the KC Jazz Club atop Washington, DC's Kennedy Center for the Performing Arts, following Live at the Kennedy Center Volume 1 (MaxJazz, 2006).

Volume 2 picks up where Volume 1 leaves off, basically staying in an up-tempo mode and demonstrating Miller's intelligent compositions. Miller mixes things up on "Song for Darnell, beginning in a melodically minimalist manner before transforming into an assertive ballad whose swing coefficient goes off the chart with several 4/4 breaks where Miller plays his piano like a bulldozer leveling a lot. "'Grew's Tune is structured staccato romp that recalls much of the late Gene Harris' playing. Miller's double-stops are fun and exciting, accenting the piece with a drama that extends to Derrick Hodge's bass solo.

"Farewell to Dogma teases the listener with gospel chords and phrasing that draw the expectant listener in, thinking Miller is about to embark on a soul jazz extravaganza. Miller, all the while, is deconstructing that same soul jazz into its individual elements, exploring each with care and completeness: A style palette, if you will. "Eleventh Hour is much the same way. It is five minutes of boogie-blues and the rest proto-hard bop. Mulgrew Miller proves a master at compelling jazz, drawing listeners close and then surprising them. That is the fun of jazz.