Wynton Marsalis: Live at the House of Tribes 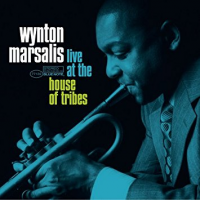 Wynton Marsalis' dominance seems at times so complete that it's easy to either become suspicious of the musician represented by the vita sheet, or take it as a given that he's the world's greatest trumpet player, if not music-maker. Live at the House of Tribes offers little conclusive evidence for either position, but it certainly makes the case for a non-controversial middle ground.

The program appears designed to appeal to a wide audience within the liberal spectrum of mainstream modern jazz. The opening selection, Monk's rarely heard "Green Chimneys," is a riff-driven, primarily single-chord piece introduced over an infectious boogaloo street beat—an ideal vehicle, in other words, for introducing the musical personalities of the band. "Just Friends" is taken at an uncharacteristically laid-back tempo, with Latin percussion and heavy emphasis on the off-beats. "You Don't Know What Love Is" and "Donna Lee" are the two least compromising performances on the date, the latter conjuring up the ghosts of Bird, Diz, and 52nd Street halcyon days. "What Is This Thing Called Love," normally a bebop staple, returns to the accessible rhythmic feel of "Just Friends," and the closer, "2nd Line," is an elemental New Orleans blues march that's obviously a crowd-pleaser.

Listening to Marsalis on this occasion, I couldn't help but notice no small amount of Clark Terry's influence on his playing. Like Terry, he alternates between a classically pure sound and occasional vocal effects, and he's continually playful and engaging, teasing his audience with minimal virtuosity before cutting loose. If his playing lacks passion and drama, it more than compensates with consummate technical command and undeniable flare.

Although producer Delfeayo Marsalis seems to have had microphones placed at select tables to convince us that the audience was eating up every note, he's otherwise to be commended for the audio quality of the recording. The sound has depth and natural presence, without the annoying boosting of the bass that's endemic on recording sessions these days. The other musicians on the date—especially alto saxophonist Wessell Anderson—manage to impress while attending to their supportive roles. Overall, a solid entry by Mr. Marsalis and a spirited musical party by his ensemble.

Green Chimneys; Just Friends; You Don't Know What Love Is; Donna Lee; What Is This Thing Called Love; 2nd Line.