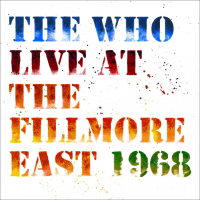 For long-time fans of the The Who acquainted with the less-than-stellar audio quality of bootlegs that have circulated over the years, this two-CD (and three-vinyl LP )fiftieth-anniversary set Live at the Fillmore East 1968 will no doubt be a revelation. Those more casual followers who may only know of the iconic British group as of their widespread commercial breakthrough in the form of Tommy (MCA, 1969) will quite possibly be more astonished-and on multiple fronts-hearing the quartet's stage show before the rock-opera became its focal point.

Except perhaps for Who cognoscenti, this title may not supersede the Live at Leeds Deluxe Edition (UME, 2001), the double-disc set comprised of an even more practiced 1970 performance). Yet it's altogether remarkable that, even sans visuals, the borderline chaos of the quartet in action resounds in this restored recording: remixed by long-time sound man Bob Pridden and and remastered by Jon Astley from Who manager and mentor Kit Lambert's recorded production, the latent violence of the group's musicianship is as prevalent as the definite sense it was all about to descend into a shambles. In fact, the group's performances, including this one, invariably did self-destruct, but deliberately so, with the smashing of guitars and demolition of the drum kit etc.

It's more than a little curious only stock group portraits appear in this package in lieu of stage photos (a blurry shot of guitarist Pete Townshend alone appears on the back cover of the digi-pak). And while this latter-day graphic design belies the seemingly well-formulated plans for a Who concert album a half-century ago, this lapse is, in its own way, a reflection of the unintentional absence on this recording of the first two numbers of this Saturday night April 6th gig; due to technical issues similar to those which effectively scrubbed the previous night's taping, the first two numbers, "Substitute" and "Pictures of Lily" are missing.

Yet those omissions are less important than the fact Live at the Fillmore East 1968 now takes its place as an important historical document of the Who on the threshold of its prime, along side the six selections from Monterey International Pop Festival Live (Rhino Records, 1992) and a more truncated inclusion in the form of "A Quick One (While He's Away)" during Rolling Stones 99' Rock and Roll Circus (Abkco, 1996).

It's invaluable to make note of the latter number as a narrative precursor to its author's future magnum opus involving the "Pinball Wizard"(as well as its arguably superior successor Quadrophenia (MCA, 1973). But as evidence of a narrative well under way at this point (and explored in great detail by the composer in a Rolling Stone Magazine interview later this same year), Townshend weaves musical themes that would appear in the story of devoted to 'the deaf, dumb and blind boy' in and out of the near thirty-some minutes of extemporization erupting from "My Generation;" such vicious interplay with the late bassist John Entwistle and manic drummer Keith Moon (now also deceased) serves as convincing support to the theory the Who gave birth to heavy metal music.

Elsewhere, the group consolidates a general impression of themselves as a singles band at this point in their career. Offering their very first release,"I Can't Explain," as well as the current 'hit,' "Happy Jack," their slightly-ragged unison vocals there take precedence over instrumentals that are otherwise so prominent in this presentation, as in the near twelve minutes of "Relax," from the ambitious concept album The Who Sell Out (MCA, 1967). A novel inclusion besides "Little Billy" (as Pete explains was commissioned for an anti-smoking campaign) is "Fortune Teller," a new addition to the repertoire alongside Eddie Cochran's "C'mon Everybody," both clocking in at around the two minute mark.

The latter marks the home stretch of a ninety-minute plus performance begun for the purpose of this release by the same author's "Summertime Blues." Lasting near seven cataclysmic minutes, "Shakin' All Over," precedes 'The Ox's' "Boris the Spider" and, as a result of this carefully-structured ebb and flow, the band can immerse itself in the visceral wash of feedback-drenched sound, the shared delight of which permeates this vintage Who material.

Andy O'Neill's extended essay in the enclosed booklet recounts the off-stage trials and tribulations of the Who in New York near the end of six weeks on the road, the exhausting likes of which events only makes the power and precision of the group on-stage all that much more remarkable to hear on Live at the Fillmore East 1968.

CD 1: Summertime Blues; Fortune Teller; Tattoo; Little Billy; I Can’t Explain; Happy Jack; Relax; I’m A Boy; A Quick One (While He’s Away); My Way; C’mon Everybody; Shakin’ All Over; Boris The Spider. Disc 2: My Generation