Nachito Herrera: Live at the Dakota 2

BY JEFF DAYTON-JOHNSON
November 7, 2006
Sign in to view read count 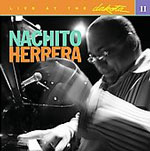 This 2003 date by pianist Nachito Herrera, a veteran of both the Cubanismo group and an idiosyncratic migration from Havana to Minneapolis, is his second live record from the Dakota, located in his adopted hometown. This time around, the large-group format of the first live disc gives way to a smaller ensemble.

Herrera's group masters the dynamic contrasts at the heart of Latin jazz. One motif is turning up the volume for the climatic resolution of repetitive themes; the opening and closing tracks are especially good examples. Another is the easy back and forth between Afro-Cuban and post bop rhythmic signatures, in the vein of Ignacio Berroa's recent Codes (Blue Note, 2006). "Afro 6/8," following a Baroque piano intro, applies this latter effect to a barely disguised variation on "Afro-Blue."

The aural quality of the recording is just fine, but the quality of the relationship between Herrera and the appreciative Minneapolis club audience is really crackling. Herrera rises (repeatedly) to crowd-pleasing crescendos in the manner of, say, Gene Harris, even if his virtuosity is considerably more refined.

The highlights of the set list include a pair of Wayne Shorter tunes; the slightly wistful treatment of "Yes or No" is even nicer than the straight-ahead Latinization of "Speak No Evil." (It's a good season for Shorter covers: see also the witty reading of "E.S.P." by Florian Weber's trio on Minsarah, Enja/Justin Time 2006.) The group manages to successfully adapt the intensity of the faster numbers to "Danzon para Aurora," a virtual catalogue of Latin jazz effects taken at less than breakneck speed.

Shai Hayo (whose own idiosyncratic migration led from Israel to Puerto Rico, before reaching Minneapolis) sounds not so much like a percussionist as a percussion army. Seconded by the powerful and sympathetic work of the delightfully named (for a Latin jazz drummer) Gordie Knudsen, Hayo makes it hard to believe this orchestral sound is essentially that of a piano trio augmented by an extra pair of hands.

Introduction; Spain in the Twins; Speak No Evil; Yes or No; Afro 6/8; Tulip