By Matthew Aquiline
February 21, 2017
Sign in to view read count 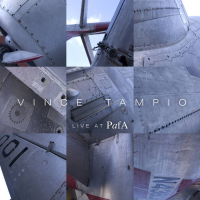 The long-standing practice of incorporating non-Western instruments within a jazz setting is further evolved on up-and-coming trumpeter and composer Vince Tampio's self-produced album Live at PafA. More specifically, the Philadelphia/New York-based musician culled various percussion instruments from Eastern Europe alongside an Indian tanpura for a performance of five original compositions recorded live at the Pennsylvania Academy of the Fine Arts. Besides enhancing the pervading atmosphere of alluring exoticism, the nontraditional instrumentation maintains a spacious environment that proves ideal for a set brimming with imaginative, drawn-out improvisation.

Firmly rooted in the jazz fusion tradition, Tampio employs an electric bass to anchor his pieces with repetitive, infectious riffs that develop a hypnotic effect when melded with the pulsating reverberations of the darbuka (goblet drum) and tanpura on tracks such as "Brainless." For the unaware, the Indian tanpura is what sustains that rolling sonic landscape that underpins the music; its strings are plucked in a steady loop resulting in a harmonic drone (think Alice Coltrane's Journey in Satchidananda (Impulse!, 1971)). In this case, the lack of rhythmic variation within a composition should not be seen as monotonous, but rather a vehicle for Tampio and saxophonist Brian Blaker to promote uninhibited improvisation.

Tampio and Blaker brilliantly embellish the unchanging rhythm on "Distracted By Mannequins," swiftly exchanging and juxtaposing serpentine phrases before coordinating the restoration of a strutting melody initially retained through the bass line. By contrast, "Thicksters" unfolds with unhurried ecstasy featuring angular playing by Blaker as well as Tampio on muted trumpet for a pensive solo. The distinct timbres of the ancient frame drum are on full display during "Gloom," dynamically backing captivating interplay that unveils a diverse range of influences covering fusion-era Miles Davis to the Art Ensemble Of Chicago and beyond. Concluding the set, Tampio and crew jovially convey their idiosyncratic depiction of "world music" for a final time on the funk-drenched "Sphere."

Altogether, this album is a contemporary instance of fusion done right. Tampio procured a cast of instruments that, when amalgamated, seamlessly coexist to fabricate magic...magic derived from unfettered intuition rather than premeditation, that is. Live at PafA skillfully straddles the border dividing orthodoxy and unconventionality and, more importantly, validates that old, time-honored axiom declaring jazz as a universal language.