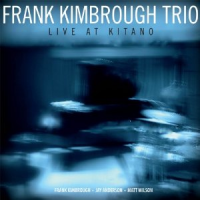 Pianist Frank Kimbrough can't avoid the magnetic pull of the trio. His own discography contains fine solo, duo, quartet and quintet dates, but a good half of the releases under his name have been triangular affairs that focus on his flexible take on this time-tested format. Kimbrough keeps coming back to this scenario, not because he has nothing else to say, but because he has so much to say in this type of setting. He speaks through the keys and does so in gentle, eloquent, engaging and occasionally elusive fashion.

Photographer-cum-producer Jimmy Katz set-up his recording gear in New York's Kitano in July 2011 to capture Kimbrough in action with bassist Jay Anderson and drummer Matt Wilson, and the resultant recording is predictably magical. Eight songs were culled from two evening's worth of performances and get to the core of Kimbrough's musical being. Moody, nocturnal melodicism comes to the fore on "Helix," diaphanous meanderings hold sway during drummer Paul Motian's "Arabesque," and wonderfully skittish uncertainty proves to be the order of the day during pianist Andrew Hill's "Dusk."

While Kimbrough's sense of expansiveness is often his calling card, it isn't overused. He digs into his own catalog for a fine and focused "Falling Waltz," swings his way through "Blues In The Closet," which features a snare-against-the-ride-beat solo from Wilson that's brilliant in its not-so-simple simplicity, and delivers a lovely rendition of Duke Ellington's "Single Petal Of A Rose." The oft-covered "Lover Man," which holds the penultimate position here, is an elegant and fragile offering that features some of Anderson's most inspired and introspective playing, and the album-ending "Hymn" finds the group working in a loose, bluesy gospel setting.

Kimbrough, for the most part, eschews the taut and high-strung trio dynamic that serves many so well, preferring instead to work in slackened settings and diaphanous fashion. His broad sense of time, mood and color mark him as a true original and serve him well throughout Live At Kitano.