By GLENN ASTARITA
June 7, 2009
Sign in to view read count 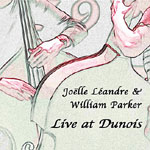 Eleven years have passed since the estimable duo of Joëlle Leandre and William Parker recorded Contrabasses for this U.K.-based record label. During that time, the two bassists have undertaken numerous projects while stamping their respective and somewhat legendary faculties across a broad path of the improvisational spectrum. Whatever the muse or passion, these artists' musical ingenuity and prowess speak encyclopedic volumes. On this live date recorded in 2009 at the Sons D'Hiver festival, the Leandre and Parker let the tapes roll and embark upon a lower register improv fest that offers a wealth of cunning propositions.

There are no track titles, although the CD itself is indexed for convenience. Then again, what's in a name? That notion is up to the listeners' discernment as the bassists execute a winding path of cross-functional patterns and deterministically motivated thematic forays. With weaving and, at times, grinding arco bass passages, the duo charts a course, brimming with darkly hued storylines amid contrapuntal movements and a few boogie grooves tossed in for good measure. On part 3, Leandre's lyric-less vocals cast a mystical edge, shaded with moments of jubilation atop the dual-bass component.

They render frantic sub-plots with mesmeric bowed bass lines while expanding a motif, then realigning for a brute-force attack. Tightly enacted teamwork comes into play throughout this appealing venture. In various movements, they soar skyward via climactic opuses and affecting storylines. Overall, the twosome looms as an impromptu force of nature, yet never suffocates each other's line of attack as the duo unifies the omnipresent musical spirit in a thoroughly persuasive fashion.