By GLENN ASTARITA
January 7, 2016
Sign in to view read count 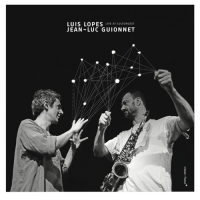 Experimental jazz improvisers, guitarist Luis Lopes (Portugal) and Jean-Luc Guionnet (France) align their creative wares for a largely ferocious program consisting of two lengthy tracks, captured live at a Lisbon venue. The respective artists employ surgical deconstruction mechanisms to get the job done with some wily Sci-fi like motifs that may summon an impending Armageddon or something to that effect. But the duo's improvisational processes are also steeped in minimalistic forays and various interludes designed with micro- themes and hushed tonalities. Nonetheless, the customary call / response and mimicking exercises come to fruition, where things can get kind of steamy and somewhat menacing.

On "Part I," Lopes' controlled feedback articulations reach a harmonious accord with Guionnet's sonorous extended notes. Moving forward, the musicians generate concise themes with brackish overtones as they arm themselves for battle. The guitarist's fervent attack includes staggered chord clusters and closed-hand strumming techniques while soaring events into overdrive on many occasions. Yet he closes out "Part I" with clipping harmonics amid Guionnet's gruff and flickering upper-register notes.

The musicians' ignite "Part II" by progressing in linear fashion along with gobs of counterpoint and tersely executed flows. They also moderate the proceedings and rev it all back up with a syndicate of knotty incursions, accelerated by the saxophonist's plaintive cries, simmering flurries and gravelly arpeggios. Thus, it's an imaginative excursion, shaped by the artists' perceptive insights and strategic developments that are not extended into oblivion, as they sustain a good deal of interest throughout.