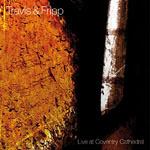 Despite King Crimson being on permanent hiatus—at least officially, though momentum continues with its ongoing 40th Anniversary Series of newly remixed/remastered back catalog—its remaining co-founder, guitarist Robert Fripp, doesn't appear to be slowing down as he approaches 65. A hotly anticipated new recording teams the intrepid guitarist/soundscapist with guitarist Jakko M. Jakszyk and '70s Crimson alum/saxophonist/flautist Mel Collins; but with über-bassist Tony Levin and drummer Gavin Harrison also involved it's beginning to sound a lot like the next in Crimson's long series of reincarnations, though the jury is out as to whether or not it crosses the line in Fripp's mind that makes it actually Crimson. In the meantime, Live at Coventry Cathedral—culled from the last of four concerts in May, 2009—reunites Fripp and British saxophonist/flautist Theo Travis, who released the all-improvised and softly stated Thread (Panegryic) in 2008.

Fripp's innovations in the area of guitar-as-orchestra have, by now, become iconic. From linking two reel-to-reel tape recorders together to creating the primitive Frippertronics of the classic No Pussyfooting (DGM Live, 1973) to the more sonically expansive, sample/digital-based Soundscapes of Love Cannot Bear (DGM Live, 2005), Fripp's influence on multiple generations of guitarists has also turned into a touchstone for other instrumentalists. One being Travis, who has adapted Fripp's sonic investigations for his own Ambitronics, heard on the appropriately titled solo flute disc, Slow Life (Ether Sounds, 2009).

Coventry Cathedral expands the premise of Thread, as the duo creates layer upon layer of sound, sometimes so radically altered as to render indiscernible who is playing what. But it's impossible not to recognize Fripp's silky, sustaining tone on the opening "The Apparent Chaos of Stone," as he soars over Travis' combination of layered, flute loops and his own in-the-moment responses to the guitarist's various directional shifts. Gentle? Yes, but Coventry Cathedral also travels to darker and more foreboding places than Thread, especially on the more oblique "The Unquestioned Answer," where Fripp's warm, clean tone interacts with Travis' soprano sax to create a piece of music that, harmonically static though it may be, ebbs and flows from a whisper to greater expressionism.

But the biggest surprise comes 13 minutes into the second of the two sets that comprise Coventry Cathedral's 80 minutes: a pastoral rework of the delicate, ethereal and melancholy "Moonchild," from Crimson's landmark debut, In the Court of the Crimson King (DGM Live, 1969). As would be expected from this duo, however, song form is largely dispensed with and, instead, flute, guitar, and electronics mine the melody at the song's core, as Travis and Fripp improvise at a level far beyond Crimson's nascent capabilities four decades ago.

Ephemeral, ethereal, atmospheric at times; dark, brooding, and more decidedly grounded at others, Travis and Fripp's performance is all the more remarkable for the duo's only occasional work together. Combining clear simpatico with the inherent energy of surprise and unpredictability, Live at Coventry Garden represents an even more empathic meeting of the minds than this improvising duo's sublime debut.

The Apparent Chaos of Stone; Field of Green; The Unquestioned Answer ; Blue Calm; Duet for the End of Time; The Offering; Angels in the Roof; Moonchild; Lamentation.