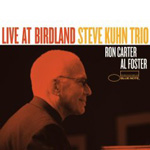 You have to crank the volume hard to hear Bill Evans' whisper-soft intro to Miles' "So What" on Kind of Blue (Columbia, 1959). When you hear it, though, you know something special this way comes. Steve Kuhn comes from the same school of subtlety as Evans, and Kuhn's one-finger opening to his trio's Blue Note debut, Live at Birdland, achieves the same effect as Evans' hushed chords: a simple beginning to a tremendous set.

This disc would have been special, in any case. Aside from their respective resumes, the trio—pianist Kuhn, bassist Ron Carter and drummer Al Foster—did a legendary one-week stand two decades ago at the Village Vanguard that produced two stunning live albums: The Vanguard Date (Owl, 1986) and Life's Magic (Blackhawk, 1986). Material from both records has been re-imagined for Live at Birdland, and the result is both fresh and exciting.

Kuhn plays four single notes, like a faraway church clock, on the opener, "If I Were A Bell." He takes the head while Carter goes off on his own, each monologue moving toward the same intersection. By the time they link, the tune is in high gear, and Kuhn's solo has gone from spare to soaring. It's like easing off the parking brake at the top of a steep, steep hill. One moment you're barely creeping forward; the next, you're flying almost straight down, and loving every second of the freefall. (If this ride isn't enough for you, you get one more trip on the breakneck Bird closer, "Confirmation.")

Live at Birdland dances as much as it dives. "If I Were A Bell" gives way to Fats Waller's "Jitterbug Waltz," mixing classical-music reverence with bursts of humor typical of the wild-eyed NOLA legend who told us all, "One never knows, do one?" Foster gets us all dirty (salsa) dancing with his Latin backbeat on Billy Strayhorn's "Passion Flower," and "Stella by Starlight" hangs in the air like a leaf on the wind, darting to and fro on Kuhn's buoyant playing. By contrast, Carter's "Little Waltz" is stark and mournful, with Carter referencing Michel LeGrand's theme from Summer of '42, another tale of love and innocence lost.

Kuhn, like Evans, does so much with so little. He is a remarkable two-handed pianist, launching dueling solos throughout the disc, but he's at his best when he gets sparse, as he does on the solo snippet of Debussy's "La Plus Que Lente" which he uses to preface "Passion Flower." Carter should play in trios the rest of his life, because the format is optimal for the stained-glass beauty of his playing. Rock-solid one moment, butter-soft the next, Carter's bass is still the best, bar none.

Campaigns start way too early nowadays. But like the presidential race, the competition for best disc of 2007 has begun, and Live at Birdland is the frontrunner. Let the debates begin!