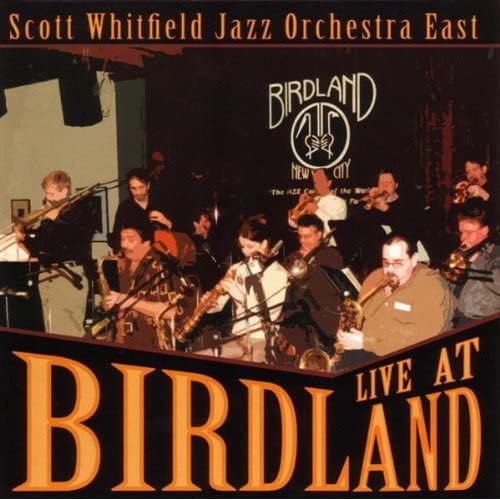 Note to myself: file this album under “P” for “Pleasant Surprises.” I must confess that I knew nothing about Scott Whitfield except that he plays trombone, so I had no idea what to expect from his Jazz Orchestra East, whose concert performance at New York City’s Birdland night spot was recorded on Whitfield’s fortieth birthday, March 10, 2003. What I got was far more than anticipated or even bargained for—better than an hour of exhilarating deep-in-the-pocket contemporary jazz by an “almost big band” (twelve members strong) that honed its chops by playing together for more than a year at Birdland and uses them to great advantage on every number.

Whitfield, who, as it turns out, is a superlative trombonist, is also something of a Renaissance man who composes (he wrote four of the nine selections), arranges (everything on the album) and even sings, a talent he nourished as a member of the Pied Pipers and his own group, the Manhattan Vocal Project. His compositions include a lovely ballad, “Sapphire Eyes,” written in memory of Princess Diana of Wales (Whitfield’s parents are British); a sunny bossa, “Mimosa,” and sharp revisions of two crowd-pleasing standards, “On Green Dolphin Street” and “Just Friends,” renamed “One Way Street” and “Juiced Friends.” Completing the program are David Raksin’s haunting theme from the film noir “Laura,” taken at a rapid 12/8 clip; Bix Beiderbecke’s classic “In a Mist,” played as a waltz; and J.J. Johnson’s playful homage to Horace Silver, “In Walked Horace,” a showcase for Whitfield and fellow trombonists Wayne Coniglio and Pat Hallaran. As for Whitfield’s singing, it is, sad to report, no better than ordinary (where are the Pipers when you need them), as are the songs by Rodgers Grant (“The Gift of Love,” “Laughin’ and Lovin’”).

Ubiquitous as he is, Whitfield is by no means the only flower enhancing this garden. The orchestra deserves a standing ovation (which it apparently received), and there are sharp and well-tailored solos along the way by Coniglio, trumpeter Bruce Staelens, alto Karolina Strassmayer and drummer Darryl Pellegrini (“Juiced Friends”); Hallaran, pianist Kenny Ascher and flugel Mike Hackett (“Mimosa”); bassist Phil Palombi and baritone Dave Schumacher (“One Way Street”); tenor Dan Jordan and trumpeter Mike Ponella (“Laura”); Strassmayer, Hackett and Pellegrini (“In a Mist”), Schumacher and Staelens (“Laughin’ and Lovin’”) and Jordan again (“The Gift of Love”). Ascher, Palombi and Pellegrini comprise an industrious rhythm section that cooks at any tempo.

Is there a downside? Yes, only one. Apparently, there’ll be no more recordings by the Jazz Orchestra East, as Whitfield has moved westward. But New York’s loss is the Los Angeles area’s gain, and Whitfield has already recruited personnel for his newly formed Jazz Orchestra West. With so many world-class players calling the West Coast home, I can hardly wait to see (and hear) the fruits of that enterprise.