By Doug Collette
November 1, 2003
Sign in to view read count 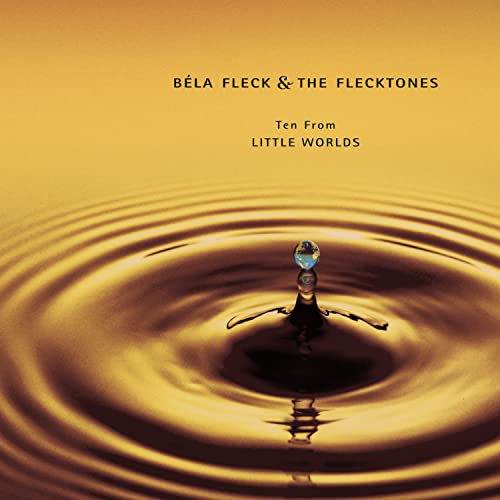 Little Worlds is a gorgeous package of three compact discs on which Bela Fleck and the Flecktones seamlessly interweave inspiration, creative spontaneity and judicious production.

The crystalline sound quality is just one of the constants deriving from collaboration between Bela himself and recordists Robert and Richard Battaglia: it’s a pleasure to listen to this music for the way it sounds alone. But that leads inevitably to the serendipity of the musicians’ improvisation on the respective tunes, a process which led to the expansion of the album’s original concept from a strict quartet endeavor to a free-for-all of guests. Fleck, ‘Tones and friends rarely lose their sense of direction. On the contrary, as with the instinctive coupling of “Off the Top[The Gravity Wheel]” and “Of the Top[Line Dance],” the musicians instill readily discernible form to their playing.

The humor quotient that distinguished this band’s earliest projects dissipated dangerously low on the most recent ones, so this half-rapped version of “Ballad of Jed Clampett” has its place in the scope of the album, but only a small one. The bulk of the total two-hours plus playing time is given over to the exploration of a musical curiosity that includes exotic instruments such as the theremin; “Centrifuge” is just one cut on which this instrument appears and the Australian wind instrument didjeridoo shows up on the same track, as well as “New Math,” where Paddy Moloney of the Chieftains plays the ullean pipes.

Lest you think Little Worlds is an exercise in esoteric self-indulgence, pay attention to the way the album flows over the course of the three discs. While much of the early going insinuates itself gently through the recurring use of Celtic melodic themes, there’s a distinct if understated increase in the intensity of the music between the first disc and the second. The appearance of guitarist Derek Trucks (who always elevates those musicians around him) on “Pineapple Heart” ratchets up the visceral momentum of the music another level altogether, while “The Last Jam” brings this entire affair to an emphatic climax.

The more cerebral textures of the first two discs stand out in even greater relief at that point, but this dynamic progression may not be all that apparent to the casual listener. No doubt that’s why there’s also an abridged version of the complete CD set available under the title Ten From Little Worlds. This single compact disc plays like what it is, a selection of tracks culled from the project as a whole – and if it doesn’t seem like a truly random collection, there’s only a comparatively slight thread of continuity at work on it. Then again, it’s a testament to the unerring instincts of the Flecktones and their many guests, as well as the perceptive production talents of Bela himself, that both editions of this new album have rewards in direct proportion to the breadth of the respective packages.