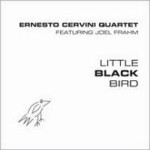 Ernesto Cervini has produced a gem of a record to closeout 2009. The music on Little Black Bird reveals the promise of a sophisticated intellect that is serious and funny, inventive, childlike and mature at once. Most of all, Cervini is unafraid of filling a blank musical canvas with waves of unusual harmonic color. He shows himself to be adept at genteel melody and constantly challenges himself rhythmically, as well. Although principally a percussionist, Cervini is also an astute pianist and a fine clarinetist. This might explain—to some extent—his wonderful sense of how horns fit in as lead voices with his scheme of things.

On Little Black Bird Cervini plays drums exclusively and hosts Canadians Adrean Farrugia and Jon Maharaj on piano and bass, respectively. Rising star American Joel Frahm is heard on saxophones and is very much the lead voice on this record. There are eight originals here and one remarkable rendition of a Radiohead track, "2 + 2 = 5," which appears to have been inspired by Brad Mehldau delving into that popular band's repertoire. However, the main attraction is the absolute purity of song and the fluid structure of each of the originals.

Each of the songs on this record has a colorful and original story to tell. "Coconut Bill" hobbles from a quirky rhythmic beginning settling into a suave bebop tune with a twist in the tail. "Cerebrau" is much the same, only this time the rhythmic twist is in the head of the bebop piece. "Mia Figlia" has a leonine thread running through it as it stretches and relaxes with rhythm and harmony intertwined delightfully. "Little Black Bird" mimics the call of the feathered species; Cervini's tune is utterly alluring, as the song of the exotic bird must have been. "Nonna Rosa" and "On Being Grand" display the softer side of the musician and showcase the tenderness in his writing. All of Cervini's music has striking architecture and yet has the elastic spontaneity that makes this music ever evolving and inviting.

Of the voices heard here, every one sings with faultless pitch, tone, and manner. Saxophonist Frahm shows why he is so much in demand—his deep connection with the music and musicians plays out in his deep reach with tenor and soprano horns. There he finds the most apt note, turns a series of notes into an interesting idea, with surprising phrases of such beckoning beauty that his work never fails to adorn every song. Pianist Farrugia is sensitive and inventive at the same time. His solos are the inverse of Frahm's, marking points of departure that make gently expressed, wide sonic expeditions that always refresh the melody. Bassist Maharaj is astoundingly melodic throughout. Together these musicians bring something special to this memorable record.