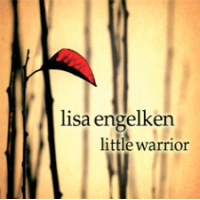 Polymathic in her talent and approach, vocalist Lisa Engelken further cements her status as a far-reaching artist, established on the previous Caravan (Self Produced, 2010), with the present Little Warrior. Described as, "part freight train, part junkyard trombone," Engelken is 100% an American, hailing from the Kansas heartland where she obviously picked up fluency in Portuguese, French, Spanish and Italian, all of which she shares with us. What of the music? The music is pleasantly all over the place.

Engelken employs a traditional jazz piano trio, supplemented by additional voices both instrumental and human. With this, she makes music that sounds like fusion cuisine tastes. It is easy to identify the elements that make up the sum individually, but that sum is something quite new and refreshing. For example, Engelken's original "Housemate From Hell" is indeed a "serpentine ensemble a la Kurt Weill and Tom Waits," were those two to meet at the crossroads at midnight, sharing a snifter of brandy. Pure Broadway by way of the Bowery (or Skid Row out West). Bob Reich's accordion adds that perfect connection between Weill and Waits while powerfully melded with Engelken's power and precise vocals.

Jazz standards? If you call "Undertow" (the vocal arrangement of Wayne Shorter's "Nefertiti") and Chick Corea's "Sea Journey" standards. Gratefully, there is no "My Funny Valentine." Instead, Engelken covers the aforementioned Tom Waits' "Blue Valentines" as an off- kilter ballad (what else?) that was made for an off-Broadway production of Moon for the Misbegotten. Performed with only piano and bass, "Valentines" has the smell of soft leather soiled with single-malt whiskey. This is pan- sensual music: tactile, fragrant, loud and bright. Think a very hip Barbra Streisand sans the cult of personality. It is a good direction in which to be going.

Foggy Bottom; Viva La Felicita; You Where Those Eyes; Throw It Away; Housemate From Hell; Little Warrior; Undertow; Sea Journey; Cold Blue Steel & Sweet Fire; Blue Valentines; All I Do Is Dream Of You.