BY JACK BOWERS
February 2, 2015
Sign in to view read count 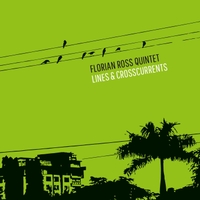 Although you'd be hard-pressed to pick Florian Ross' quintet out of a lineup, the German-based helmsman wrests as much color and contrast as can be envisioned from a group that includes himself on piano or synthesizer, Markus Segschneider on pedal steel guitar and Niels Klein on clarinet, bass clarinet or tenor sax. If the music on Lines & Crosscurrents veers at times toward smooth jazz, it never quite crosses that line, thanks mostly to Ross's perceptive charts and the quintet's collective expertise. The synthesizer at times produces an ethereal ambiance, while the steel pedal guitar lends some tunes an Hawaiian veneer.

The album is comprised entirely of original compositions and arrangements by Ross who last recorded with a quintet a decade ago. His charts make good use of the format, giving everyone ample work to do to ensure its success. That includes bassist David Helm and drummer Fabian Arends whose rhythmic skills neatly underpin the enterprise. If there are times when Arends seems a trifle heavy-handed, those moments aren't persistent; for the most part, he and Helm keep the rhythm flowing with a minimum of intrusion. Klein, meanwhile, adds flavor throughout, opening on clarinet ("Arp 1," "Exhibit A") and shining on tenor sax ("Etch-a-Sketch," "Driftwood") or bass clarinet ("Rough Patch"). Segschneider, charged for the most part with enhancing the rhythm, comes to the fore on "Etch-a-Sketch" and "Manifold," delivering crisp and engaging solos.

Speaking of solos, Ross fashions several splendid ones, even though his purpose clearly seems to be to give prominence to the quintet and underscore the group activity. That he does, and does quite nicely, enabling his prismatic compositions to speak for themselves. While you are unlikely to go away humming any of them, that's not to say they are any less persuasive because of it. Ross has put his best foot forward and given the listener more than an hour of earnest and perceptive small-group jazz.