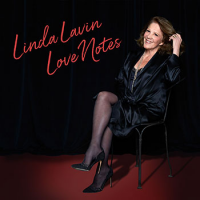 Linda Lavin has spent a life on stage. If the term "Broadway Legend" means anything, surely it applies to Lavin, whose collection of Tony nominations and awards, critics' prizes, and Golden Globes for her role as "Alice" on television is nothing, if not impressive. Although you may not have followed her career closely, you knew she was a singer from "Alice," for which she recorded the theme, more than once. Hearing a good collection of songs from Lavin at this stage of her life is a welcome surprise.

While the recording is classified as jazz and Lavin's material is both from the Great American Songbook and the jazz canon (as well as an original, "Stars Would Fall"), it is hard not to view the result as a product of musical theater, because that would seem to be her style. Everything about the production is polished and professional, from the orchestrations by Wayne Haun, arrangements by Aaron Weinstein and Billy Stritch, top musicians and even graphics. Lavin said in a CBS Sunday Morning interview that she wanted to remind people, as the famous movie line goes, "I'm still here." That she does admirably well. For instance, Lavin's cover of "Chega de Saudade" is brightly paced, but does not quite have the jazz feel or time of, for instance, Roberta Gambarini's 2006 recording, which is a relevant standard of comparison. Musical theater, which is a substitute for narrative, has a fundamentally different purpose than jazz singing, where emotional transformation dominates. It is not a matter of better or worse, but different. Lavin's "How High the Moon" is plenty good, but no one is going to put it up against what Ella Fitzgerald did in 1947. Nor should they. The same applies to "Just Squeeze Me," which is fine far as Lavin's singing goes, but comes off more mannered than cool.

Linda Lavin deservedly has lots of fans, and they will enjoy this recording as entertainment, which is just what it is: very good entertainment.

I've Got My Eyes On You; Not A Care In The World/Shall We Dance; I Wish I were In Love Again; I Can't Tell You Why/I Walk A Little Faster; Chega de Saudade (No More Blues); Stars Would Fall; Just Squeeze Me (But Don't Tease Me); Black Cow; Ace In The Hole/Rap Tap on Wood; It Don't Mean A Thing (If It Ain't Got That Swing/I Got Rhythm); You Must Believe In Spring; How High The Moon