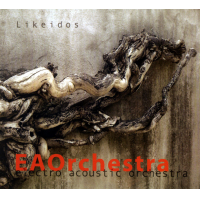 The worlds of avant-garde classical music and avant-garde jazz mingle seamlessly on Likeidos, by Italy's Electro Acoustic Orchestra. Also known as the EAOrchestra, the ensemble is co-led by trumpeter Mirio Cosottini and bassoonist Alessio Pisani (bassoon), who also composed most of the music. The preponderance of double reeds—an oboist and four bassoonists—is highly unusual, especially for improvised music of any kind, and gives the EAOrchestra some truly distinctive and unusual sonorities. Though Likeidos has a particularly strong emphasis on composition, there are a number of remarkable improvisations on this disc. In fact, this band brims with top-drawer improvisational talent. Soprano saxophonist Gianni Mimmo, for example, is one of the most inventive and virtuosic soprano saxophonists on the scene today. Mario Arcari is one of the finest improvising oboists around, best known for his work with trumpeter Franz Koglmann. Cosottini and Pisani also step out quite impressively—Pisani's electronically modified bassoon on "Back Again" is a real attention-getter.

Another unusual aspect of the music on Likeidos is its lack of a pulsing rhythm section. Instead of driving the pieces, percussionist Francesco Cigana plays sparingly, supplying color and texture. Guitarist Marco Tindiglia's legato approach puts him in league with the winds and brass. The absence of a bassist is compensated by the presence of contrabassoon, bass clarinet, and trombone—but all three tend to play lines that complement or provide counterpoint to the actions of the higher-pitched instruments. Thankfully, there is no lack of rhythmic forward motion as a result—a further tribute to the ensemble's vast musical skills. Though carefully arranged and highly scored, the music seems warm and organic, unlike the contemporary classical music that clearly influences Cosottini and Pisani. The shimmering guitar/soprano saxophone duet that opens "Oscillazioni" is gripping from the first utterance and intensifies its hold as Mirko Guerrini's tenor sax joins the dance around a swaying ensemble figure. The music ebbs and flows—soloists fade in and out, alliances are formed and broken—as the piece turns and floats like a giant Calder mobile.

Sylvano Bussotti's "Autotono," by contrast, is episodic, consisting of sharply defined sections of ensemble and solo passages based on a graphical score. Mimmo's soprano work here is absolutely stunning—at times spitting out granules of sound like watermelon seeds. The title track is an avant-garde ballad of sorts. The piece derives its flow from its ever-shifting harmonic densities and constantly fluctuating dynamics. "Point" offers a little more of what might be expected when the phrase "contemporary classical" is uttered—randomly peeping brass, clarinets, and double reeds are offset by a malevolent theme played by low brass, low reeds, and contrabassoon. Tindiglia's distorted, metallic guitar is particularly effective during the piece's climax.

Likeidos presents skillfully played, imaginative avant-garde music that transgresses musical boundaries as much as it transcends them. Not destined for across-the-board appeal, EAOrchestra nevertheless has created and filled a fascinating niche in the jazz/classical continuum. The warmth and beauty of the music on this disc is, by itself, a minor triumph.