By Laurel Gross
September 7, 2007
Sign in to view read count 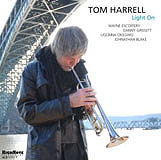 Tom Harrell is like that rare good friend who is exempt from the usual "three-day rule for house guests—after which even the best of buds can loose their bloom. If he has nothing to say, he doesn't fill your ears with empty phrases. And if he knows he can't be fully present on a visit with you, he won't be there at all. Which is exactly the way it's been with the trumpeter, who hasn't made a recording as a leader for a US label in four years.

But now he's back and, like that old friend, you can reasonably expect he has something to share. The debut of the new CD feels a bit momentous, frankly. In his liner notes, Neil Tesser makes a plea that listeners give this recording repeated spins if they are to hear totally what this trumpet man has to impart. But Harrell needs neither sell nor plea on his behalf.

More riches will be gleaned from subsequent hearings. But Harrell is so exquisite and distinctive a player—the same can be said for his compositions—that certain things stand out plainly and elegantly from the start. Can you miss, even at first hearing, that something remarkable is going on in "Nights at Catalonia or "Architect of Time ? And if you're not sure you've come to the right place immediately, jump to Harrell's solo in "Contrary Mary.

The sure fire of Harrell's trumpet and flugelhorn defies categorization, light and ethereal and at the same time solid and dead-on with certainty, yet imbued with the fragility and resilience that accompany human existence. Words can't convey the ineffable, the music must. And Harrell gives it everything he has.

In realizing his ideas, spun on singular chord changes and stunning melodic hooks, improvisation and composed movements, he seems to have chosen the best of bands. Tenor saxophonist Wayne Escoffery unfurls voicings that offer contrasting tones and textures to the horn master's efforts. Bassist Ugonna Okegwo is solid, picking up on nuances of the themes with ease. Danny Grissett sparkles on piano and Fender Rhodes. Johnathan Blake rides and crashes confidently.

Harrell's never been a blow-hard. If he has a big ego it doesn't show. All the more reason why this is a house guest you want to have around.