Various Artists: Light My Fire: A Classic Rock Salute to The Doors

By GLENN ASTARITA
August 16, 2014
Sign in to view read count 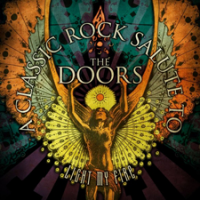 When I first broke the seal on this recording and perused the personnel listing I was delighted yet partly suspicious, fearing this would be an unbalanced project and/or a riffing contest framed on The Doors songbook. Such is not the case. Thus, Todd Rundgren performing alongside Captain Beeheart Magic Band guitarist Zoot Horn Rollo and Yes keyboardist Geoff Downes signify one of many rather unlikely, yet markedly productive and enticing state of affairs. It's a varied set, where all the vocalists retain their signature chops and modus operandi. Although one unremitting factor is centered on their penchant for extracting the force-field of The Doors' vocalist Jim Morrison's commanding delivery.

The production's stunning sound quality yields additional bonus points and should warm the hearts of audiophiles. Ultimately, each rendition of The Doors' songbook is imbued with the musicians' idiosyncratic niceties amid a plethora of shrewdly placed dynamics, layered keys and guitar shadings. They inject distinct characteristics but don't sacrifice The Doors' core song-forms. Hence, disparate musical personalities uncannily attain an accord on many fronts by imparting a sense of ownership and camaraderie, whether or not they were recording tracks in the same studio at the same time.

It's easy to discern that Sherwood and associates maximized the talents and style of each artist's strengths, juxtaposed by strong soloing spots and the obligatory personal touches that many of us would anticipate. Van Leer helps give "Love Me Two Times " a modern uplift by instilling some good old Hammond-B3 organ style boogie rock, abetted by Coryell's Texas blues patterns and hard rock phrasings. Moreover, guitar hero Leslie West (Mountain) does what he does best via his emphatically thick vocals, coupled with sinuous slide guitar leads atop Rod Piazza's harmonica notes, as they punch it out on this husky finger-snapping spin on "Roadhouse Blues."

Highlights are thriving components, especially when infamous Yes alumni, guitarist Steve Howe and keyboardist Rick Wakeman delve into an extended call and response motif, spanning rock, jazz and classical nuances in the bridge section of "Light My Fire." Here, Ian Gillan provides the antithesis of what we'd expect, considering his high-impact vocals with Deep Purple, as he counterbalances the soloists with a care-free and straightforward rendering of the familiar choruses. Indeed, this tribute endeavor covers all the bases and then some. It's not to be overlooked. Kudos to the production team for bestowing their rather enlightening plan of attack as it's quite apparent that a lot of thought prefaced the onset of this astonishing alignment of rock's past and present rock stars.

L.A. Woman; Love Me Two Times; Roadhouse Blues; Love Her Madly; Riders On The Storm; The Crystal Ship; Intro (People Are Strange); People Are Strange; Touch Me; The Soft Parade; Hello, I Love You; Spanish Caravan; Alabama Song (Whiskey Bar); Break On Through; Light My Fire; The End.