Maximize your visibility at All About Jazz by upgrading your musician page from standard to premium. With it, you'll receive All About Jazz home page exposure, a highly stylized / ad-free musician page with bonus features and benefits, an ad, plus you control where you sell your music and so much more.
Learn More
463 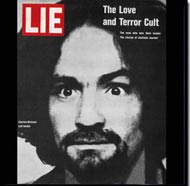 It is quite surreal to handle a copy of Lie: The Love and Terror Cult, and certainly a very bizarre feeling to know that someone so twisted as Charles Manson and his cult, The Family, were the artists behind it all. Still, no matter how outrageous it appears, artists they are—albeit questionable ones. Or are they...? The reaction to Manson's music here is determined by the bias (rightfully and justifiably so) resulting from being guilty of the horrific Tate-LaBianca murders. This is probably what tainted the sales of the record when it first was released, with just three hundred of the two thousand copies sold. But that was the sixties. America was at the height of its reactionary politics, and the hippie movement had adopted Manson as an icon, but the tragic events associated with The Family's involvement in the Tate-LaBianca murders put paid to not only the popular, hippie counterculture, but also to the future of Manson's music career

At first blush, and this is exactly what this record will be to many listeners today, the record may not be path breaking, musically or otherwise. But it is, nevertheless, a significant musical document, considering it is a reflection of the popular counterculture. As a musical event it does have several moments, however. Significantly, most of folksy tracks have stood up to the test of time. "Look at Your Game Girl" and "Eyes of a Dreamer" are iconic, as is "Cease to Exist" and "The More You Learn to Love." "Cease To Exist" was, in fact, co-written by the Beach Boys' Dennis Wilson and was also recorded by the group, but as "Never Learn To Love"—first as a single and then on 20/20 (Capitol, 1968). Other tracks have since been covered, hidden in or just blatantly swiped by various artists who show varying degrees of admiration for Manson's musicality.

If it is possible to put aside the cynicism or angst towards Charles Manson then it is possible to enjoy this record. Although the music does, at times, come across as being a tad simple—even simplistic—it also has its moments of freshness. What effectively destroys any pleasure that may be derived from listening to the music are the events that Manson helped unfold. Still, while he is no Dylan or John Sebastian, Manson was indeed driven by the same existentialism that drove many of his generation. He was cruelly distracted by the hidden impulses contained in his songs, and the rest is a sordid history. But it is hoped that that fact will not diminish the experience of listening to this music for what is hoped to be. The booklet accompanying the music includes liners by Bernard Stollman of ESP-Disk and liners by Phil Kaufman, the record's original producer. Those, together with Steve Alexander's "Charles Manson Interview" make the 2008 release quite historic.

Look At Your Game, Girl; Ego; Mechanical Man; People Say I'm No Good; Home Is Where You're Happy; Arkansas; I'll Never Say Never To Always; Garbage Dump; Don't Do Anything Illegal; Sick City; Cease To Exist; Big Iron Door; I Once Knew A Man; Eyes Of A Dreamer; Devil Man; The More You Love; Two Pair Of Shoes; Maiden With Green Eyes (Remember Me); Swamp Girl; Bet You Think I Care; Look At Your Game, Girl (alternate version); Interview; Who To Blame; True Love You Will Find; My World; Invisible Tears.

Charles Manson: guitar and vocals; The Family: other instruments and background vocals.