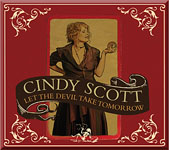 Vocalist Cindy Scott is a rare breed of artist—comfortably covering a variety of music, undaunted by genre barriers and walls that scare lesser singers into pursuing a singular line of musical thought. The dozen songs that Scott presents on Let The Devil Take Tomorrow make up a rich smorgasbord of sounds, moving from Brazil to the Bayou and covering everybody from Smokey Robinson to Hank Williams.

"You've Really Got A Hold On Me" opens the album, and features three distinct aural markers from disparate locales. Drummer Geoff Clapp provides the New Orleans vibe, guitarist Brian Seeger contributes the blues edge and saxophonist Ed Petersen sends off hints of R&B. Scott quickly changes gears on the second tune, serving up an Eva Cassidy-like take on Bread's "If." Vadim Neselovskyi—familiar to some for his work with Gary Burton—contributes some finishing touches on melodic—melding with and moving around Scott's wordless vocals.

While the first few songs on the album show Scott's penchant for choosing material from outside the jazz canon, she makes sure to throw in a couple of standards that demonstrate her strong skills in more straightforward jazz settings. The piano and vocal duo performance on "You Don't Know What Love Is" stands out as a perfect blend of technique and interpretive skills, with Scott running through some dazzling lines in unison with Neselovskyi. "I'll Be Seeing You"—which closes out the album—begins with some piano work filled with sadness and, both Scott and Petersen hold onto this feeling in their performances.

It seems that jazz vocal albums aren't complete these days without some Brazilian fare, so Scott presents her Portuguese vocals on "Beatriz," and delivers "Obsession" to fill the quota. She also makes her mark with some original compositions, including a second-line scorcher with some direct lyrical references to New Orleans ("The Boy Can Play"), and a song she co-wrote with Seeger that sounds like it could have come from the Bonnie Raitt songbook ("Start Again").

Other highlights include a saucy take on "Perhaps Perhaps Perhaps," and a clever interpolation of Pink Floyd's "Money" riff into "Kiss Of Fire," but the emotional centerpiece of the album is Hank Williams' "I Can't Help It (If I'm Still In Love With You)." Serious sadness, tinged with tender regret, comes through on this haunting performance—featuring some spooky, atmospheric pedal steel touches from Seeger, some fine piano soloing from Neselovskyi and a dark bass line from Tommy Sciple. The Devil may take tomorrow, but—judging from this recording—Cindy Scott clearly owns today.

You've Really Got A Hold On Me; If; Perhaps Perhaps Perhaps; You Don't Know What Love Is; The Boy Can Play; I Can't Help It (If I'm Still In Love With You); Let This Love Last; Obsession; Kiss Of Fire; Start Again; Beatriz; I'll Be Seeing You.