By NENAD GEORGIEVSKI
December 12, 2014
Sign in to view read count 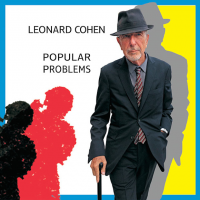 On 21st of September, Leonard Cohen, member of an elite triumvirate of singer songwriters joined the 80 club. A day after his birthday, he delivered a new record and another chapter of his life opened to the public. Cohen is one of those singer songwriters that have kept maturing, producing new and interesting work with every advancing decade of his life. And there is something wondrous about Cohen delivering a new record for his 80th birthday. That he is delivering a masterpiece of a record is even more wondrous thing than that. Several months after the mammoth tour that saw him traversing the world he is again part of the world with Popular Problems.

Popular Problems reads almost like TV news or a front page of any daily newspaper. Contrary to his previous record and masterpiece, Old Ideas, (Columbia, 2012) which dwelled on mortality issues, among other topics, which have preoccupied and inspired him, Popular Problems tackles the world's problematic and conflicting issues or complex relationships seen through the symbolics of worldwide every day conflicting events. Decisively simple, brimming with lyrical ambition and powerful wisdom, this is a record with weight, moral complexity and dark humor. Much like on the previous record, his work very ferocious and more focused, and at the centre of all of those lyrics, imagery and music is Cohen's voice which is the most unique instrument of all.

The first song that was introduced from this record was "Almost like the Blues," which lyrics reflect the horrors of Civil war and is full of imagery of destruction, famine and misery. This is Cohen at his angriest, with his words burning like fire as they are propelled by his raspy, baritone voice:

I saw some people starving/ There was murder, there was rape / Their villages were burning/ They were trying to escape I couldn't meet their glances/ I was staring at my shoes/ It was acid, it was tragic/ It was almost like the blues.

Similarly to the opening track on Old Ideas with the slight self mockery of his public image on "Going Home," he does a similar prank on "Slow" by referring to his own slowness or the pace of his songs but also to his working habits—he is also known for his slow but persistent work on lyrics, some of which take years to complete. A perfect example to this is "Hallelujah," as it took him 10 years to finish the lyrics to this classic. Such is the slow, but perfectionist side to this poet. The blues as a form has never really been used on any of Cohen's previous records, but starting with "Darkness" from Old Ideas he goes deep into that dark and bottomless pit. It's a slow paced, menacing blues song with lyrics that reflect self parodic humor that he is a master of. And the slow blues riffs on the keyboard somehow underline the burning quality of his voice:

I'm slowing down the tune, I never liked it fast/ You wanna get there soon, I want to get there last/ Its not because I'm old/ It's not the life I led/ I always liked it slow/ That's what my momma said.

"Samson in New Orleans" is inspired by post-Katrina New Orleans and musically it is vintage Cohen with the slowest of pace and melodies, where a gentle and mournful violin floats among the poet's phrases. It is a lament for a neglected city. "A Street" is a blues that places marriage strife in the midst of a Civil war and is a precise examination of a disintegrating relationship. His weary and raspy voice, backed by lush and sweet female harmonies in the background, almost enunciates the lyrics that conjure the image of fallout of a romance that was divided by war between the parties:

The party's over/ But I've landed on my feet/ I'll be standing on this corner, Where there used to be a street.

It seems that Cohen is at his best when his soulful and hurt voice plunges to dark and doomy depths, and when he offers an almost forensic examination of love's demise. "Did I Ever Loved You" is a beautiful countrish song that particularly evokes "Heart with No Companion" with its sugar sweet sing-along harmonies and the countrish stomp. It sounds like a self interrogation with Cohen revealing a hurtful and vulnerable tone in his voice.

"Nevermind" is based on an older poem, dating 2005, but slightly reworked. It's a funky and groovy tune with references to wars and treaties. Lyrically it is as ironic in the same manner as "Everybody knows" from I'm Your Man (Columbia, 1988) was. And in the midst it features Arabic flavors with a female singer chanting "Salaam" which translates as peace. The lyrics read almost like TV news with its contradictory and fabricated nature that reveal the irony of the hypocrisy of the world we live in. In an interview for Telegraph he explained that "There comes a point, I think, as you get a little older, you feel that nothing represents you. You can see the value of many positions, even positions that are in savage conflict with one another. You can locate components on both sides that resonate within you."

Popular Problems began with a blues but ends up with a spiritual. "You Got Me Singing" reminds of a message from an older Bruce Springsteen song "Reason to Believe" from the Nebraska (Columbia, 1982) masterpiece that says "at the end of every hard day people still find a reason to believe." After every ordeal and misfortune, the author, much like everyone else still finds his own reason to believe and go onward. "Even though the news is bad, You got me singing, The only song I ever had."

With its 37 minutes, Popular Problems floats easily from start to finish and yet, no record by Leonard Cohen hasn't left people ruminating over their own feelings. So what makes this litany of songs so compelling and uplifting? Cohen is a puzzle or a mystery that will thankfully never be solved. Partially, it's down to the arrangements Cohen and producer (and co-pilot) Patrick Leonard conjure to convey the spiritual essence of the songs. And it's also the way his brooding baritone croons so vividly when he exhumes the relics from the darkest corners of the human heart that most people would either try to forget or would turn a blind eye to exploring those places. With a big soulful voice that is simultaneously sad and knowing, like a blues crooner, and graceful like a jazz singer, he delivers his observations of the complexities of the bruised and battered human relations in this modern world. Unlike most of today's music, Cohen's art is not a matter of fashion, but a sincere cri du coeur, and as a result, every detail concerning Popular Problems is both rare and beautiful as anything in music.

Slow; Almost Like the Blues; Samson in New Orleans; A Street; Did I Ever Love You; My Oh My; Nevermind; Born in Chains; You Got Me Singing.