By JOHN KELMAN
October 3, 2004
Sign in to view read count 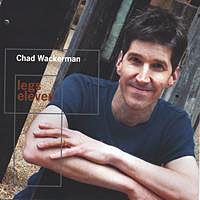 The spirit of Allan Holdsworth looms large over drummer Chad Wackerman's new release, Legs Eleven , much as it has over his previous three. And that's no surprise, given Wackerman's long history with a guitarist who has defined a unique musical language that combines heady melodicism with abstract harmonies. But whereas Holdworth's releases are often-times the result of years of painstaking care and attention to detail, Wackerman holds more closely to the jazz tradition, recording his disc in the period of a few short days in June of '03. The result is an album that, by being less considered, is more immediate and more relaxed. Holdsworth's albums may ultimately feel effortless as the result of his perfectionism, but Wackerman's discs have that in-the-moment ambience, a certain element of surprise, that Holdsworth's occasionally lack.

Following his '99 release, Scream , Wackerman pares the group down from a five-piece, retaining his Australian group of vibraphonist Darryl Pratt, bassist Leon Gaer and, most importantly, twenty-something guitarist James Muller. Muller has worked with a number of other Australian groups, including Pratt's Sonic Fiction and pianist Mark Isaac's group, and he continues to prove himself to be a most adaptable guitarist, while still asserting a strong personality regardless of the context. For Legs Eleven Muller continues to use, for the most part, an overdriven sound and approach that is clearly reminiscent of Holdsworth, but with a sharper sound, more attack and less complete reliance on legato phrasing. He fits in with the group's more here-and-now approach, soloing with a facility that never loses sight of being inherently lyrical. A young player who deserves broader recognition, every appearance he makes on record is a vivid experience, and Legs Eleven is no exception.

ADVERTISEMENT
Effusing about Muller doesn't take away from the contributions of Pratt and Gaer. While the idea of a vibes-guitar-bass-drums quartet is nothing new, it is unusual in a fusion context. Pratt's midi'd vibraphone means that there are all kinds of sonic possibilities with a lineup that on first inspection might be considered more mainstream. And, for those who think of fusion as a dirty word, while Wackerman and the group have the energy, there is none of the grandstanding that sometimes stands for fusion. Everyone plays with an open attention to space and, though the arrangements are tricky, they never feel considered or overly-intellectualized.

Wackerman's writing, in fact, took a giant leap forward with Scream , more successfully combining intriguing close voicings with melodies that were eminently singable, while at the same time the slightest bit unusual. So while Scream was something of a revolutionary record for Wackerman, Legs Eleven is more evolutionary, honing his writing even further. And his playing continues to combine dazzling technique with a strong sense of groove.

Wackerman recently relocated to the States after spending a number of years in Australia. Let's hope the move doesn't result in the dissolution of this fine ensemble, as Legs Eleven shows these players are clearly continuing to evolve individually and as a group.

Sophie's Beach; Spiral; Legs Eleven; Where You Come From; Newtown; No Time Like the Future; Tangara; Field of Mars; Rhythm Clock; Balancing Acts.